A desperate Parramatta have produced the upset of the year with a brilliant win against competition high-flyers Melbourne that has suddenly breathed life into their top-four hopes.

The Eels were dead and buried just a fortnight ago when thumped 56-10 by Manly. The knives were out for coach Brad Arthur.

But the Eels channelled some good old-fashioned western Sydney spirit to score a well-deserved 22-10 win over the Storm. It was the second time this year they defeated the heavyweights.

Arthur sensed his side were not going to die wondering after the week they had.

“I’d seen it at the start of the week, we had an intensity about what we did, we had a level of focus, and then I saw it when we got here tonight,” Arthur said.

“I knew they were on and they’d have a red-hot crack. I couldn’t guarantee we’d get the result, but I was confident in the style of performance we’d put out there.”

Gun playmaker Mitchell Moses was one of the Eels best and, like Arthur, was delighted with the boilover.

“It’s been clear we haven’t been happy with our last month of footy, we got back into the groove last week [against the Cowboys], but to put in a performance like that, we nailed some opportunities, and probably left a couple of tries out there,” Moses said.

“We knew we had to lift. We completed pretty high, and we knew if we went set for set with Melbourne, we were the fitter side and we’d come out on top.”

Melbourne had drawn level with the almighty Eastern Suburbs side of 1975 with 19 consecutive wins last week, and could have set a new mark with victory at Suncorp Stadium. 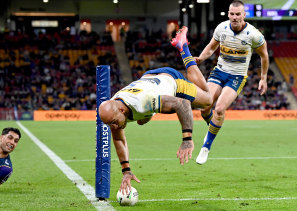 But they looked off the pace almost from the opening whistle, could not get themselves into good enough field position to threaten the Eels, and lost Josh Addo-Carr to a hamstring injury early in the second half.

To make matters worse, skipper Jesse Bromwich was placed on report for a crusher tackle on Isaiah Papali’i, while Harry Grant was also cited for what appeared a form of hip-drop tackle on Makahesi Makatoa.

Storm coach Craig Bellamy said what hurt the most was they flopped in Felise Kaufusi’s 150th game for the club.

“We didn’t give a yelp tonight,” Bellamy said.

“I can’t remember the last time I’ve been as disappointed in a milestone game for one of our players – with all due respect, I’m a bit embarrassed we came up with that performance on a night where Felise is playing his 150th.”

Storm hooker Brandon Smith said the Eels were simply too good in a game that had a finals-like intensity about it.

“It’s a bit sad our [winning] streak has come to an end, but we always knew Parramatta were a good side,” Smith said.

“We had respect for them. They deserved the win. They completed at around 90 per cent, they kicked to the corners and had good field position – that’s what you need to do in the big games.”

Parramatta proved Melbourne are human. The cracks for Melbourne started to appear against Manly a few weeks ago. The Storm, however, will welcome back Dale Finucane and Nelson Asofa-Solomona in the coming weeks.

The Eels did not escape with their own injury and disciplinary concerns with Clint Gutherson hobbling off midway through the second half. Nathan Brown was also placed on report for clocking Tom Eisenhuth high.

Gutherson played down the injury afterwards when he said: “I couldn’t extend into a run and it felt like my whole leg was vibrating. Hopefully, it’s just a cork, I should be right and a couple of beers will fix it.”

Arthur will push ahead with his original plan to rest players, including Gutherson. Gutherson added Arthur had never lost the dressing room, and he and Moses had made a point of telling the coach they had his back.

“We pulled him to the side and told him we’ll back you to the death. We knew we were letting him down,” Gutherson said.

The Eels can give themselves a shot at a top-four finish against Penrith next weekend. Manly are arguably better placed to pinch fourth and the all-important second chance during the finals.

Parramatta’s traditional blazing start to the season was always going to help their cause this late in the campaign in terms of ladder position.