Canterbury and Adam Elliott have mutually agreed to part company immediately in a move that will avoid a legal showdown and offer both parties a fresh start.

Elliott’s future was again at a crossroads after he was ejected from a Gold Coast restaurant following a toilet tryst with NRLW player Millie Boyle. The incident raised the prospect of his contract being torn up after the NRL fined the forward for “bringing the game into disrepute and failing to comply with biosecurity protocols”. Boyle was given a warning. 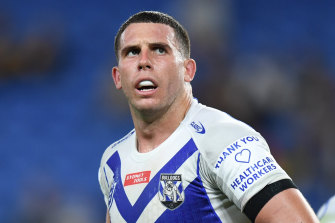 Adam Elliott and the Bulldogs are parting company by mutual agreement.

Elliott fronted the Bulldogs board this week to give his version of events, telling powerbrokers the incident was the first time he had touched alcohol in seven months. The 26-year-old told directors and club supremo Phil Gould he wanted to see out the final two years of his contract and would do whatever was necessary to do so, even if it meant agreeing to a booze ban.

Some powerbrokers were still keen to terminate his contract after several alcohol-fuelled incidents, including a night out at the home of former teammate Michael Lichaa on Valentine’s Day and the infamous 2018 Mad Monday celebrations in The Rocks.

The parties have been in sensitive negotiations over the past 24 hours in a bid to reach an amicable outcome. That has now come to pass, with the Bulldogs and Elliott agreeing to a release from his contract. Under the terms, Elliott will be paid out for the rest of this financial rugby league year, will agree not to take legal action over the separation, and is free to join a new team for the 2022 season. A formal announcement is expected from the club on Friday evening.

Elliott signed with Canterbury for almost $100,000 less than he would have received had he taken up a lucrative deal from the Warriors when he was last off contract. His departure will free up an estimated $450,000 per annum under the salary cap for the Bulldogs. The back-rower will add to his 95 NRL games at a new destination.