The first part of the battle has already been won. England know that Saturday’s opponents won’t be wearing capes and masks. They realise these All Blacks are not mythical superheroes; they are mere mortals. Vulnerable ones.

When the Kiwis come to Twickenham on Saturday evening, they must confront hosts who expect to beat them. Again. 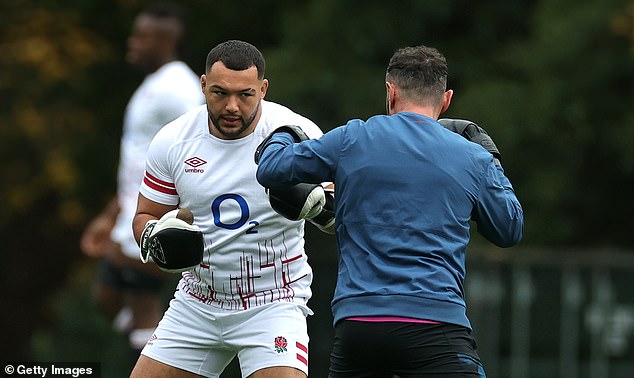 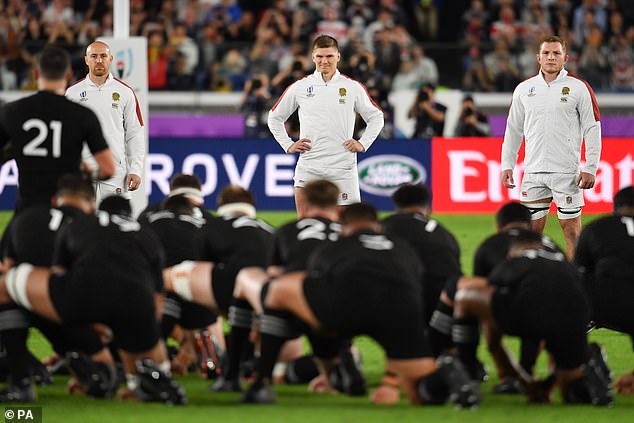 It was illuminating to hear Ellis Genge talk about England’s last encounter with the All Blacks.

Bristol and England’s rampaging prop has established himself as one of the world’s pre-eminent front-row forwards and he betrayed no hint of apprehension about what awaits him and his Red Rose team-mates on this grand autumn occasion.

‘We know that they’re definitely human,’ he said. ‘Prior to 2016, they absolutely smoked everyone and had a win-rate of 92 per cent.

‘Seeing Argentina beat them and one or two others – it’s either going to make them better, or you smell blood and go for it.

‘I don’t think anyone is thinking we are going to lose, but we know we’ve got to be on our mettle, otherwise you’ve seen what they do to teams. They absolutely spank them.

‘They lost to Argentina one week and then put 50-odd points on them the next. That’s just the way they play.’ 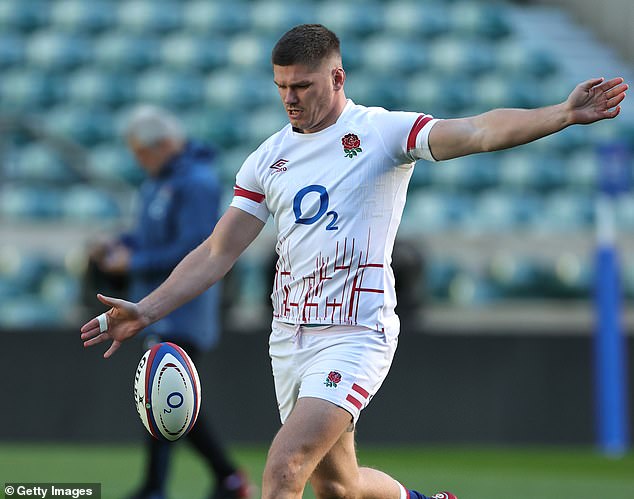 This is the equation for England on Saturday. If they start well and take charge, they expect to win. But if they allow New Zealand to build momentum, Ian Foster’s team-in-transition retain the ability to run riot, as Wales discovered when they conceded a half-century of points earlier this month.

They are at once increasingly fallible and still potentially lethal.

Within an hour of thrashing Japan last weekend, Eddie Jones set the tone for this fixture by declaring that the All Blacks were ‘there for the taking’.

He’s right. The head coach has also been at pains to emphasise that England’s all-time win record is below 20 per cent against these opponents, but this is a big opportunity to redress that statistic.

Saturday’s match could prove to be a landmark – far beyond home captain Owen Farrell and New Zealand second-row Brodie Retallick both winning their 100th caps for their countries.

There is a real sense that England can drive home a profound shift in the global balance of power. 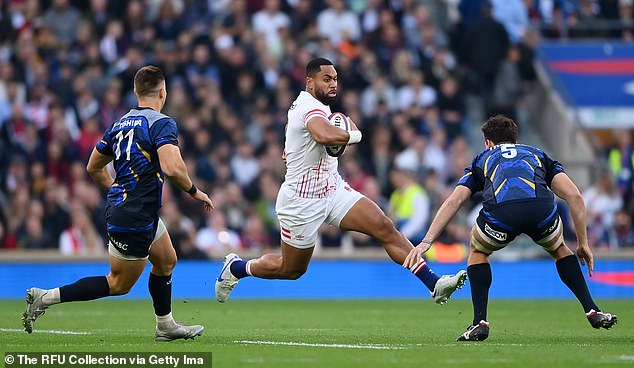 Last autumn, Ireland and France both defeated the All Blacks. Then in July the Irish claimed a maiden series win in New Zealand.

When the Kiwis suffered a first home loss against Argentina, Foster was swamped by a backlash and came close to being removed from office, before his NZRU bosses settled on revamping the staff around him, including the crucial addition of former Ireland head coach Joe Schmidt.

The All Blacks have since rallied and come to Twickenham on the back of six straight Test wins, but got out of jail at the death in Melbourne when the Wallabies were poised to beat them and survived scares in Tokyo and Edinburgh. 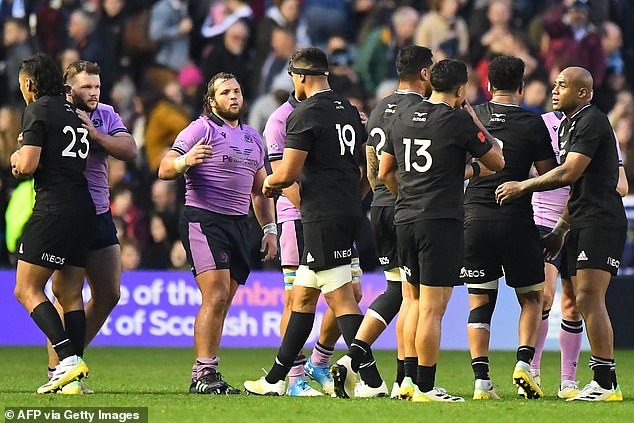 Last Sunday at Murrayfield, the Scots led by nine going into the final quarter and knew that they threw away an historic result.

The upshot of this turbulent year is that the aura has well and truly gone. The pedestal which the All Blacks occupied for so long has been dismantled.

England can reinforce the impression that the age of Kiwi supremacy is over and that, more broadly, the north-south divide has been turned upside-down.

Saturday’s visitors can still reach performance heights, as the Welsh would confirm, but that win in Cardiff was founded on dominance of the collisions which England – with a big, aggressive pack – simply will not allow. 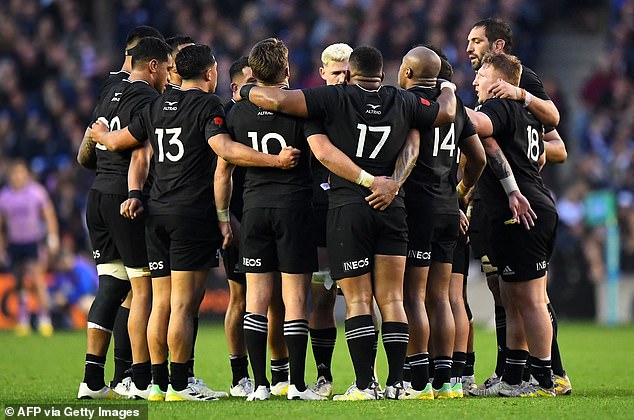 Jones’ men are not up against a vintage All Black line-up featuring modern-day greats such as Richie McCaw and Dan Carter.

Aaron Smith and Brodie Retallick provide links to the golden past and Ardie Savea is surely the stand-out world star of 2022, but in terms of depth of class, New Zealand are shadows of what they once were.

Yet, they will still take some beating and won’t go quietly. England need the conviction they had in Yokohama, when they won that 2019 World Cup semi-final 19-7.

They will need Maro Itoje to be canny in running the lineout with only two jumpers and provide all his trademark energy after being challenged by Jones to prove he can be the best player in the sport. They will need Billy Vunipola to make dents and Sam Simmonds to make breaks. They will need Tom Curry to lead a sustained breakdown blitz with tenacity and courage, and they will need Genge to reprise his human cannonball exploits from the Australia tour. 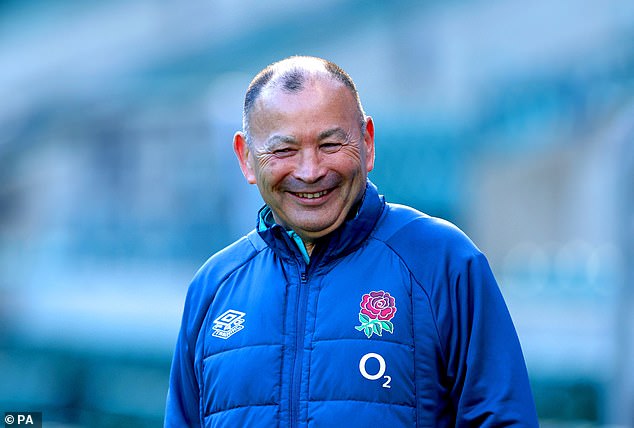 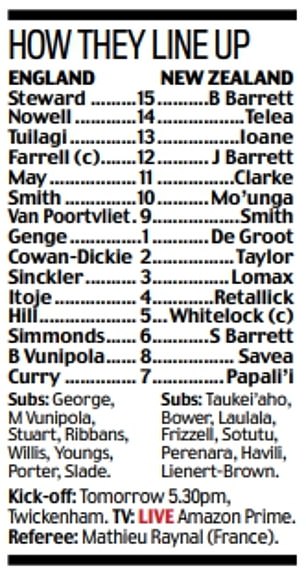 They will need Farrell to mark his century by running the show with assurance. They will need Manu Tuilagi to awaken the ghosts of 2012 and Freddie Steward to be typically commanding in the air.

Leicester’s rookie full back spoke last weekend of trying not to be overawed but, if anything, New Zealand should be in awe of him.

England’s new-generation players don’t have the baggage and pre-conceptions of so many of their predecessors.

They have seen Foster’s erratic side lurch through 2022 and know that they can be ambushed on Saturday.

Unlike three years ago, it shouldn’t take a stunt involving a samurai sword and a tray of kiwi fruit to convince the home squad that the All Blacks are indeed there for the taking.

There is a chance on Saturday evening for England to re-draw the terms of this rivalry. If there is any fear, deep down, it should be in the visitors’ camp.

England should feel like favourites, embrace that status and then justify it. If they don’t freeze, they can win by 10. 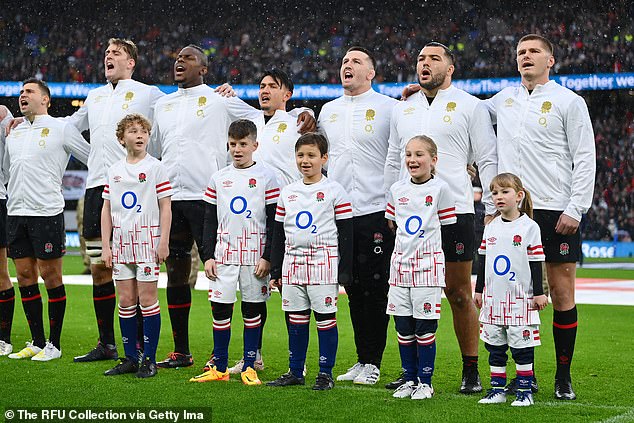