Several players at the top end of this year’s AFL draft pool are considered flight risks, limiting the ability of some clubs to land the best talent available with their picks.

A growing number of players are unwilling to be drafted to clubs outside their home states, and according to one recruiting boss, some are even outright saying that they want to avoid moving interstate in pre-draft discussions.

The practice is becoming an increasing concern for expansion clubs, the Giants and Gold Coast, but is also a relevant consideration for clubs in traditional football states South Australia and Western Australia. 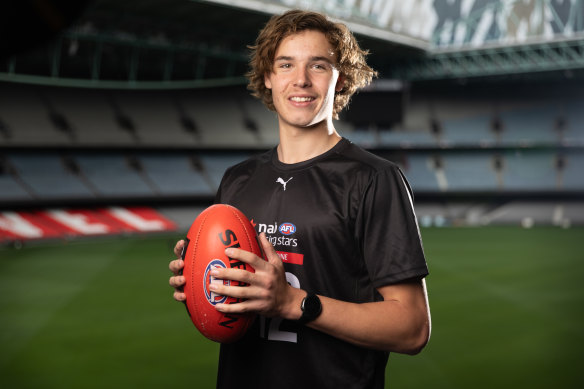 Potential No.1 pick Aaron Cadman. The Giants traded up to pick one to ensure access to him.Credit:Jason South

Giants national recruiting boss Adrian Caruso said most players were subtle about the likelihood of remaining with the club if they were drafted to Greater Western Sydney. However, some were increasingly overt about their unwillingness to go to any club.

“We’ve had the scenario in the last four or five years when there is usually one or two guys that you have got some concerns over,” Caruso said.

“Some will actually go out and say it to you, or their managers will say it to you, that this guy doesn’t want to move. Others are a bit more subtle and you have to work out whether it is the right fit.”

The Giants have lost the majority of their players who were selected with first-round draft picks during the trade period in the past decade and again this year were forced to trade Tanner Bruhn to Geelong just two years after using pick No.12 to draft him in 2020.

The trend played a significant role in the Giants’ desire to get the No.1 draft pick via trades this season so they could zero in on a player they are confident will stay, and may even be able to engage in discussions before the draft about extending his contract beyond two seasons.

“We have to be targeted and specific in the type of players that we want to bring in and we feel like getting up to pick one gives us an opportunity to get to work on the one or two players we really want to target,” Caruso said.

“It makes it challenging when you do have early picks and you feel as though some players at the top end that you know are not as open to moving … this year it does feel like there are a few more near the top that we would have some concern over and that is the reason why we have traded up.”

Gold Coast list boss Craig Cameron hesitated to call it a trend, but said he had noted more players this season wanted to leave clubs to return to their home state. Jason Horne-Francis, Bruhn, Luke Jackson, and Jeremy Sharp were among the players in this trade period who wanted to home early in their career after being drafted interstate.

“There is no doubt that this trade period has seen more young players make the decision they wanted to return home, not just from expansion clubs but from all clubs … we always have a consideration of a player’s flight risk,” Cameron said. “Do we have fewer players to choose from? Yeah, maybe.”

The Giants have been linked to Ballarat player Aaron Cadman at pick one, while industry sources say the rationale for the Eagles to trade out their No.2 pick was partly driven by concerns that the players likely to be taken at that pick would want to return home early in their careers.