Home » Rugby » Fish out of water? Why Panthers forward was made for the big stage

Ivan Cleary can still remember the kid wearing the No.23 jersey. Cleary thinks it was an under-18s SG Ball trial at the start of 2013.

"It was a trial Nathan [Cleary] was playing in and I remember seeing this kid, I can still remember the No. 23, and I said to someone, 'Who is that bloke?'," Cleary recalled during the week. 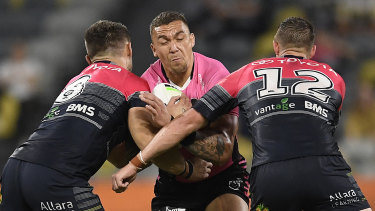 The Kiwi prop has been inspirational for the competition leaders.Credit:Getty Images

He was the tearaway winner of the Merv Cartwright Medal last season as Penrith's best. Few Panthers fans would complain if Fisher-Harris took out the club gong again this year.

Fisher-Harris' move into the front row this season has been one of the many coaching masterstrokes for the competition high flyers who are enjoying a rare but vital weekend off.

The 24-year-old was always going to cope with the first and second hit-ups. He is old-school tough. He only knows one gear on the training paddock and game day. He was the man who accidentally smashed Reagan Campbell-Gillard's jaw during an opposed session.

"Fish played almost 80 minutes every week in the middle during a tough year last year, and he was our player of the year by miles," Cleary said. "But never for one second he looked like he was satisfied. He's like that now.

"This year we specifically said 'this is where you will play' and, like he always does, he nodded his head and said righto.

"He's put a bit of weight on and got a bit heavier – he's totally ripped, he's all muscle."

Nathan Cleary said of Fisher-Harris: "Our forward pack is so under-rated, they get through so much work and some of them barely miss a tackle.

"Unfairly the accolades go to the spine a lot more than they should [rather] than the middles, and they've definitely been the heart and soul of the team this year. 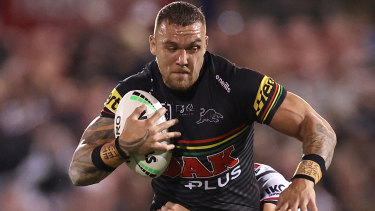 James Fisher-Harris is one of the quietest but fiercest players at Penrith. Credit:Getty Images

"Someone like Fish is a workhorse. I'll be struggling to get out of bed the day after a game and he's in the gym after making 60 tackles and 30 runs. It's unbelievable. It's super to have people like that in the team … guys like him don't go unnoticed amongst the group."

When you ask Ivan if "scary" is the best word to describe Fisher-Harris, he says: "That would be unfair when you talk about him being an absolutely committed family man to his partner Nat and little girl Tahira. But you wouldn't want to cross him."

Phil Gould is credited with getting a tip about Fisher-Harris and following it up in New Zealand. Fisher-Harris grew up in the tiny rural town of Kohukohu, in New Zealand's far north, and travelled over with Canberra and former Penrith forward Corey Harawira-Naera.

The pair first lived above some stables at Fernhill Estate and the rural lifestyle on Sydney's outskirts was the closest thing to back home.

Fisher-Harris was given his debut in round one of 2016 on a sweltering Saturday afternoon in Canberra and then Panthers prop Trent Merrin said: "He's ruthless and relentless – he hits like a truck. His work ethic is incredible – he's a name of the future."

A four-minute interview with Fisher-Harris featured mostly nods, one-word answers and the occasional widening of his piercing green eyes whenever he did not understand a question. He remains quiet and shy.

Teammates used to struggle with his whispering and strong accent, so much so that Harawira-Naera used to double as a translator.

"We just want to do our thing and keep rolling," Fisher-Harris said. "Everyone back home [Kohukohu] is happy as and loves watching us play each week. There are some Warriors fans, but most of them are Penrith now."

Who is going to argue with that?