The Queensland Rugby League will register Israel Folau’s bid to return to grassroots rugby league for the Southport Tigers on the proviso he obtains a release from his Catalans Dragons contract.

Folau is seeking to make a league comeback in the Gold Coast A-grade competition for the Tigers. His backer, Tigers patron and billionaire businessman Clive Palmer, threatened to bankroll a Federal Court injunction on religious discrimination grounds if the cross-code star wasn’t registered today. 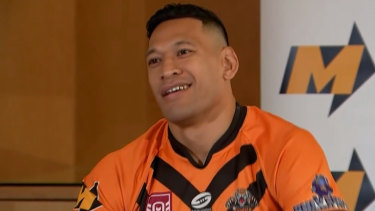 Israel Folau is closing in on an Australian rugby league return.Credit:Nine

“As a not-for-profit organisation, the QRL’s objectives are to foster and develop the game in Queensland, and to generally take action that is considered to be in the best interests of rugby league in Queensland.

“With this in mind, the QRL Board has carefully considered all aspects of the registration request, in line with its current rules and processes.

“In doing so, the QRL can today share the following:

Catalans permitted Folau to return to Australia on compassionate grounds, but the expectation was that he would come back at some stage or offer a suitable compensation package should he wish to remove himself from his deal. Dragons officials were blindsided by Folau’s intention to join the Tigers.

The QRL had privately indicated they would seek written assurances that Folau won’t publicly express his divisive religious views in considering his registration, although no mention of this was made in Wednesday’s release.

“Any registration is subject to Folau confirming he has read and understood his obligations as a player under the QRL Rules, the QRL Code of Conduct and the Community Rugby League Terms and Conditions NRL Registration,” the QRL statement continued.

“Should the registration proceed in compliance with these conditions, any breach of the code of conduct could lead to suspension, or the cancellation of the player’s registration, as it would for any other player.

“The QRL acknowledge that previous social media comments made by Folau, whilst not a registered participant in rugby league at the time, do not align to the beliefs of the game, or the QRL.

“The QRL is an inclusive organisation with a proud diversity and inclusion framework.”