The Waratahs’ season from hell just keeps getting worse after the Western Force booted a penalty after the siren to make it seven straight losses for a tortured NSW outfit.

Despite an excellent showing from new No.10 Ben Donaldson and being right in the box seat, once again the Waratahs were their own worst enemy, falling 31-30. 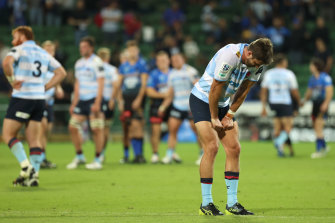 Jake Gordon after another heart-breaking loss.Credit:Getty

The Force trailed by nine points with just over eight minutes remaining. Jordan Olowofela crossed to send a scare in the NSW coaching box but when Domingo Miotti missed a penalty attempt from 52 metres, the Waratahs looked to have locked things up with a penalty in their own half.

But this Waratahs team? Think again.

An overthrown lineout from hooker Tom Horton with seconds remaining gave the Force one last chance to march down the field and secure their first home Super Rugby victory in nearly four years.

After more than 20 phases, the Force earned a penalty and that man Miotti slotted a simple kick to crush the Waratahs in embarrassing fashion. It is up for debate whether a Waratahs player was actually offside, with replays not showing conclusive evidence.

Nearly three weeks since Rob Penney was sacked, the 231-day drought continues for the Waratahs, who can’t take a trick.

It is almost unfathomable that the Waratahs lose twice in a season to the Force and now face a long flight back to Sydney digesting the fact they have gone seven fixtures without a win.

“It’s been a tough year for us,” NSW captain Jake Gordon said in one of the great understatements of 2021.

“It’s disappointing how it ended. We put ourselves in a position to close the game out with a lineout and unfortunately it didn’t happen that way.”

The main storyline of Saturday’s match was without doubt Donaldson’s promotion to No.10, for the noise off the field has been an unwanted distraction within the Waratahs’ inner sanctum. 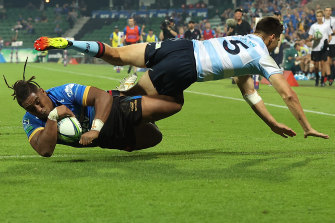 When a Shute Shield coach labels the selection “crazy”, it was always going to cause a stir.

Those at the famous Randwick club were desperate for their man Donaldson to prove a point, while some aggrieved individuals at Eastwood would have been privately hoping reserve Tane Edmed would validate Ben Batger’s remarkable outburst this week that Shute Shield form wasn’t being rewarded at the next level.

Edmed didn’t get on the park, so good was Donaldson.

The majority of NSW supporters wanted to see Donaldson do well. Regardless of club allegiances, regardless of how much rugby he has played against men, grinding out a win and finding his feet at Super Rugby level was the priority.

Calm, composed and relaxed were adjectives used to describe Donaldson in recent days and they were pretty spot on. He has a bright future, as do the other NSW No.10s in Will Harrison and Edmed.

The Force went public with an intention to target Donaldson but there wasn’t an unusual amount of traffic his way.

Donaldson didn’t get the ball in his hands for the first 10 minutes but his poise was on show when taking the first conversion from a Will Harris try.

The ball fell off the tee and, with time running out, he picked up the ball, looked up, before slotting a drop-kick on the angle that had Andrew Mehrtens singing his praises in commentary.

It was a nerve-settling moment. Importantly, Donaldson nailed all six of his kicks for a tally of 15 points.

“He’s got great core skills,” Gordon said. “He kicked really well off the boot. Really excited to keep playing with him.”

Early in the second half, Donaldson set up a Jack Maddocks try by going into contact before getting away a clever offload.

It breathed life into the Waratahs and they took the lead shortly after when Maddocks threw a beautiful left-to-right pass that winger Alex Newsome finished off with an ankle-breaking, right-foot step.

Izaia Perese had his best game in a sky blue jersey, once again showing how hard he is to bring down after initial contact.

He is making up for lost time following a three-match suspension.