Police were called to a pub on Bay Street in Port Macquarie about 8.30pm on Sunday following reports of an alleged assault. 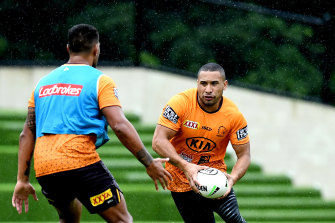 The 26-year-old former Broncos player was stopped by police in his car around the corner from the pub.

He was subsequently arrested and charged with three counts of common assault, two counts of stalking and intimidation and mid-range drink driving.

He was given conditional bail and will appear before Port Macquarie Local Court on January 20.

It is understood police are attempting to obtain CCTV from the venue, where the incident is alleged to have taken place.

The incident could spell the end of the young forward's career in the NRL.

Hopoate, the son of Manly legend John and younger brother of Bulldogs fullback Will, is currently off contract.

He played 12 games for the Broncos last season after making his NRL debut in March but failed to land a new deal.

The Panthers initially showed interest in the forward but have failed to sign him for 2021.

His younger brother, former Manly Sea Eagles young gun Albert Hopoate, has signed on with the Canberra Raiders for next season.