Lance Franklin turned the clock back with a vintage performance but it was not enough to lift Sydney to a come-from-behind victory over Fremantle at Optus Stadium.

The Swans blew a chance to put a gap between them and the chasing brigade for their spot in the eight despite a six-goal haul from their champion forward, as the Dockers prevailed in a thriller by two points on Saturday night – 12.14 (86) to 13.6 (84). 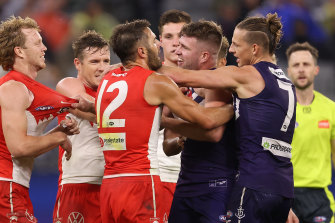 Tensions boil over between the Swans and the Dockers on Saturday night.Credit:Getty

Dual Brownlow Medallist Nat Fyfe came into the game with a miserable 2.16 in front of goal but snapped the winner with just over four minutes left.

The Swans had the chance to pinch the match with one final thrust forward but Ollie Florent ignored shorter options in Isaac Heeney and Will Hayward, opting instead for a longer kick which was rushed through.

Franklin had his jumper ripped to shreds in a half-time blue with Luke Ryan only to replace it with a red and white cape. Against the inexperienced Griffin Logue, he kicked three of his six goals in a frantic final quarter and had one touched on the line.

The Swans will rue a costly lapse in the third term when they gave up four goals to nil against a red-hot Dockers side fuming after a fiery half-time melee.

The blue appeared to be triggered by Jordan Dawson, who knocked Fyfe over, and will probably result in significant fines.

After an even first term, it was not until the second quarter the Swans started getting their reward on the scoreboard for their superiority at the stoppages.

The Dockers had the edge in the territory battle but struggled to find a way through the Swans’ defence other than through the high marking of Rory Lobb.

When the Swans attacked, they did so with more speed and purpose into an open forward line. Franklin revelled with the extra space, outwitting his 23-year-old marker Griffin Logue with his positioning.

His smarts allowed him to get out the back of a one-on-one contest in the middle and skid a long-range bomb through the big sticks and into the ball bucket on the fence.

The fluency in the Swans’ play disappeared in the third term in the face of a purple onslaught led by Fyfe, who became the most influential player on the ground.

Sydney’s capacity to absorb the punishment was a trademark of their play in the mid to late 2010s but they buckled under the weight of entries the Dockers were able to generate, giving up four consecutive goals.

Even Dane Rampe, who seldom loses one on ones, was found wanting. Giving up 19 cm in height, plus another few inches through Lobb’s extra reach, Rampe needed a ladder to match his opponent seeing his teammates were not pulling their weight up the ground.

Able to regain control of the stoppages in the final quarter, the Swans hit the front with Franklin’s fifth goal for the night but were unable to hold on.