Home » Rugby » From the Archives, 1993: Not even Ablett can save the Cats from the Dees

Not even Ablett can save Cats

THIS is going to sound pretty hard on the individual concerned, but 11 goals from Gary Ablett at the MCG yesterday just wasn’t enough for Geelong. 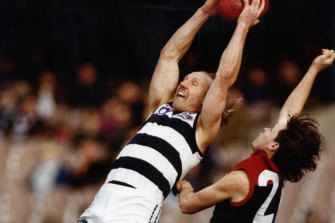 Ablett’s fourth double-figure bag of the year took his tally to 88 goals, at an astonishing average of eight a game.

But with this breathtaking individual performance was a sobering statistic for last year’s grand finalist, whose place in the 1993 deciders must now be in real doubt: in those four matches where Ablett has kicked 10 or more goals, Geelong has lost three.

Melbourne coach Neil Balme said he would have been prepared to concede Ablett four or five goals. “I wouldn’t have thought if he kicked 11 (that) they wouldn’t win,” he said.

And they didn’t. The Cats fell to the resurgent Demons by 14 points, slipping to 10th place and forcing the concession from coach Malcolm Blight that, “I suppose we are a minor chance now.”

The Demons are much more than that, although matches against Hawthorn (home) and Footscray and Adelaide (both away) in the next month will test the veracity of their finals aspirations.

In this case, they prevailed without at least three of their defensive options for Ablett: Sean Wight, Martin Pike and Phil Gilbert (a late withdrawal from the selected team yesterday morning with a strained hip), and a fourth, Peter Rohde, starting the match on the half- forward line. Rohde replaced Stephen Febey on Ablett after kicking two of the Demons’ 10 goals to half-time.

Melbourne expects to have full-forward Allen Jakovich fully recovered from a bruised heel for next Saturday’s meeting with the Hawks, who, for their part, took three quarters yesterday to rid themselves of the persistent Lions and their own inaccuracy near goal.

What followed, with Hawthorn kicking 6.3 to 1.5 in the last quarter to consolidate second place on the ladder, prompted coach Alan Joyce to step back afterwards and admire the bigger picture.

“We are probably better placed now than we have been in the past three or four years that I have had them,” Joyce said. “I’m very happy with where we are at the moment. We are in control of our destiny.

So, too, in a rather more modest way, are the Lions, who meet the landlord, Carlton, at Princes Park next Saturday in a contest that should be at least as intriguing at the presidents’ lunch as it will be in the game that follows.

The Lions have made no secret of their belief that they have been dudded in their ground-sharing arrangement with the Blues this year, while Carlton president John Elliott indicated yesterday that Melbourne was no longer affluent enough to accommodate “Fitzroy and others (not Carlton)” in the AFL.

It may also be Fitzroy’s last tilt at the finals. “If we lose next weekend, I’ll admit it’s all over,” coach Robert Shaw said.

If he’s looking for encouragement, the first 45 minutes of play at Princes Park yesterday may provide it. At that stage, the Bears led Carlton by 33 points, a tardy beginning, even by the Blues’ usual standards this year.

“We were woeful last week (a 116-point loss to Essendon) and we were embarrassed by it,” Bears’ coach Robert Walls explained. “The players were determined to have a real go at it this week.

Finishing, rather than endeavor, caught the Bears out, Walls said.

“When we missed a couple, you think you just can’t afford to do that.

In the absence of their injured skipper, Stephen Kernahan, the Blues had to look elsewhere for inspiration and effect. In this case it came from Justin Madden, with 10 kicks and six marks in the second half, prompting a compliment both lavish and timely from coach David Parkin: “Just as (Wayne) Carey turned the match last night, I thought Justin turned the match today.

Which may give you some idea of the impact the North Melbourne team and its skipper have made on the competition and public perceptions this year.

The Roos were fortunate to trail Essendon by only 10 points at three- quarter time on Friday night at the MCG, with a turnover by Chris Daniher in the last minute of the quarter enabling North to stay in touch.

The explosive impact of Carey, John Longmire, Adrian McAdam and Mark Roberts in the final 30 minutes, and North’s relatively straightforward run to the finals, it does not play a team now in the top six, suggest the Roos will remain the benchmark for some time yet.