Home » Rugby » From the Archives, 1996: Fitzroy plays its last AFL game in Melbourne

Fitzroy players, officials and supporters attended their own funeral at the MCG yesterday. The club was buried alive by a combination of a grim Richmond and even grimmer AFL commission policies. 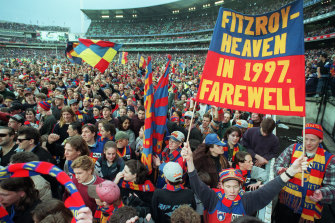 Fitzroy fans after the club’s final match in Melbourne.Credit:Joe Armao

The AFL’s chief executioner, Ross Oakley, will officially pronounce the club dead at Subiaco next Sunday. Fremantle has been requested to witness the death certificate.

Yesterday’s celebration of Fitzroy’s last game in Melbourne, after a long and honorable life spanning 113 years, began warmly. More than 48,000 people attended. One fancies more Fitzroy supporters turned up than for the past decade. Kids in conspicuously new scarves and beanies held their parents’ hands as they walked into the ground.

At least mum and dad would remember the occasion. One teenager wore an old Fitzroy jumper that carried the No. 5 and simply “Super Boot”. Bernie Quinlan will never be forgotten.

There were more Lions flags in the crowd than people who attended recent Fitzroy games. Where had all this support been for the past decade and more? It must hurt those who battled the long, lone fight for survival. 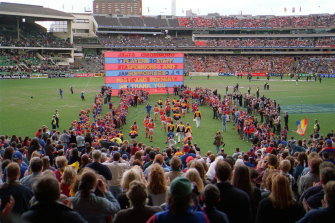 Players run onto the ground for Fitzroy’s farewell game at the MCG.Credit:The Age Archives

Before the game former greats celebrated the good times in the appropriately named Legends Room. Former player and coach Bill Stephen led them in the club song. Three cheers followed.

Ron Alexander, captain in 1979-80, represented the new and the old world of football. He rattled tins and flogged raffle tickets to save Fitzroy during its funding drives in the 1980’s. Now he is on the board of the newcomer Fremantle. He notes that Fitzroy’s death was inevitable.

The former captain-coach Alan Ruthven said the merger with Brisbane “was the most unfortunate that that has ever happened… It is really hard to take.”

Selected past players were driven around the oval: old stars like Ruthven and Kevin Murray and its last true heroes, Gary Pert and Paul Roos. Sections of the Fitzroy supporters booed the latter who, in truth, had been grand servants before they moved on to other clubs. The grieving process is rarely dignified.

The former players and more than 400 children dressed in the Fitzroy uniform a guard of honor for the players as they broke through the banner. As the players ran a warmup lap the children followed like a colorful, human streamer. Maybe only the AFL commissioners were the ones not moved by this very poignant moment. Disgracefully, the AFL hierarchy was in Adelaide for the day. Who said people return to the scene of the crime?

Sadly for Fitzroy it appeared the children stayed on to play the game and the footballers retreated to the stands. The Lions were humiliated. The wave of emotion that had galvanised the crowd dissipated in just minutes. It was a 151-point burial.

Neither coach nor players could explain such and insipid performance. Simon Hawking said he and several others felt a little embarrassed to run their lap of honor at the end of the game. They never finished it because thousands of fans streamed on to the ground to share the moment.

Supporters herded security staff off the ground, incensed by the way several supporters had been manhandled, but the players were never in danger. Up in the Great Southern Stand hung a sign that read: “So long Fitzroy – 1882-1996. Thanks for the memory.”

In a week Fitzroy will cease to exist. You could sense in the hearts of the players and on the faces of the fans after the game it was already over.

For the next seven days the Fitzroy football community will be the living dead.