First published in The Age on September 2, 1996

Hawks in a hell of a fight

If Melbourne does merge, its fans can take solace in the fact that their club, unlike Fitzroy, went out with a bang. While the hapless Lions received a belting on the other side of the country, the Demons gave Hawthorn an awful fright at the home of Australian football in front of 63,196 vocal spectators. 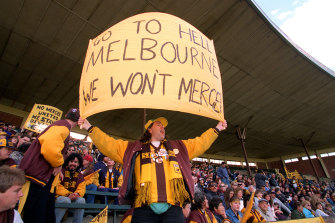 A Hawthorn fan makes his displeasure known about the proposed merger.Credit:Craig Sillitoe

Hawthorn coach Ken Judge was sufficiently moved to praise the Melbourne side. “I thought they were excellent. When you consider the players they’ve lost along the way, I think their effort tonight was fantastic,” he said.

Hawthorn, in what was virtually an elimination final, was just as impressive. Its last quarter, as the Demons launched a desperate fightback, will leave it battle-hardened for next week’s clash with Sydney.

The match was distinguished by several purple patches. Jason Dunstall’s six second-quarter goals sparked the Hawks into action after Melbourne had stretched its lead to 17 points in the first term. And Dunstall’s two last-quarter goals, the first of which was his 100th for the season, saved the game for Hawthorn.

At the other end, David Neitz was doing a similar job for the Demons. His first-quarter burst of four goals set up an early Melbourne lead while his two last-quarter goals almost won them the match. He received able back-up from Jeff Farmer, whose three third-quarter goals put Melbourne back in front after Hawthorn had established a 25-point lead.

Coach Neil Balme echoed Judge’s praise of Melbourne but must have rued the lack of tall timber on the backline that forced Andrew Lamprill and Luke Norman on to Dunstall. The Hawk skipper said that the pair were smaller than the opponents he has had of late. 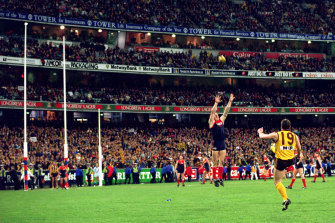 Jason Dunstall kicks his 100th goal for the season.Credit:Ken Irwin

Balme praised the “enormous heart” shown by Lamprill, Dunstall’s opponent in the Hawks’ six-goal second term. “I think he was fantastic, they got a few goals kicked on him but he kept going all night.”

But at times the task seemed to overwhelm Lamprill and it was when he tripped Dunstall at the 13-minute mark of the last term that the Hawk champion slotted home his 100th goal, sparking the traditional ground invasion by the fans. Dunstall’s next goal, which came at the 21-minute mark, was Hawthorn‘s matchwinner.

Dunstall will find the going tougher against Sydney full- back Andrew Dunkley next week but if Paul Salmon can continue his good form in the ruck and Nick Holland can repeat his superiority in the air Dunstall should get plenty of the ball.

The Hawks’ future is in their own hands and Judge said that, despite losing twice to Sydney this year, his team had won nine of its past 13 games.

Melbourne’s immediate future, however, will be decided off the field and Balme made it clear where his preferences lay. 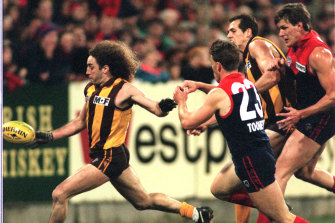 “I’ve got to support the board for the stance their taking, ” said Balme, who acknowleged that a merger could cost him his job.

“I think our clubs are in a very difficult position. I think the way the whole competition is being driven it’s very hard for all the Melbourne clubs to prosper and I think the board has shown enormous foresight and great courage in deciding that’s the direction that they want to go in.”