Home » Rugby » From the Archives, 2003: Pies goal after the siren sinks Crows

Collingwood broke its three-match AFL winning drought in the most thrilling style when Chris Tarrant kicked a goal after the siren to give the Magpies a five-point victory over Adelaide at AAMI Stadium in Adelaide last night. 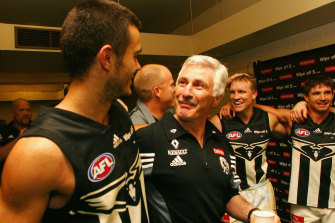 Collingwood coach Mick Malthouse said that he wasn’t sure whether to watch Tarrant’s kick.

“It’s funny,” he said. “I just thought the worst he could do is kick a point, or kick into the man on the mark – but he wasn’t going to (do) that. But you’ve just got to have faith in the bloke who’s taking the kick. 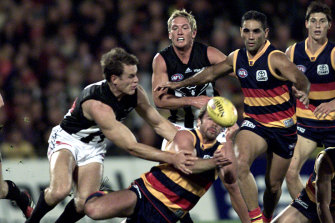 “I didn’t know whether to look or not. It’s out of our hands up in the coaches box. So I didn’t even know whether it went through.”

Malthouse, by his own admission, “reckoned at quarter time we were in real trouble”.

The Magpies hit the lead for the first time in the match when Shane O’Bree goaled midway through the final term and then stretched the lead to seven points. 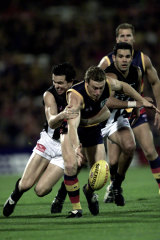 But Adelaide fought back with a goal to skipper Mark Ricciuto and two behinds to Andrew McLeod in the closing minutes to regain a one-point lead.

But Magpies skipper Nathan Buckley then found Tarrant on the lead in one final burst. And a kick from 30 metres by Tarrant just sneaked in to seal the win.

It was Collingwood’s fifth win in its past six visits to AAMI Stadium, but more importantly gave it a positive win-loss record of 4-3 to shake its losing streak.

Shane Woewodin was superb throughout the night for Collingwood with 32 disposals, 10 marks and two goals, while Paul Licuria, Buckley and O’Bree were other vital midfield contributors. Tarrant was also excellent, kicking four goals in a good duel with Adelaide’s Ben Hart.

For the Crows, Ricciuto was his side’s best player, with 31 disposals and three goals and he was particularly impressive in the first term, when Adelaide opened up a 31-point lead.

Simon Goodwin was also good in the midfield, while Wayne Carey, in his 250th AFL game, and Ronnie Burns were both excellent up forward for the Crows with four goals each.

250: Wayne Carey played his 250th AFL match (244 for the Kangaroos from 1989-2002) and it was the best of his six with Adelaide. He kicked three of the Crows’ eight goals before half-time, another one at the start of the last term and always presented himself strongly at centre half-forward.

Drizzling rain for much of the day soaked the ground and, understandably, the well-grassed surface was soft and slippery, but still in surprisingly good condition.

The Magpies front up to West Coast at Telstra Dome next Saturday and the Crows play Brisbane at the Gabba next Saturday night, with grim memories of their last match there – a 71-point thumping in the second qualifying final.

Mick Malthouse (Collingwood): “I can’t remember winning after the bell. I didn’t even see the kick (Chris Tarrant’s to win the game after the siren). I asked myself: `Do I watch or don’t I watch it?′ And by the time I’d looked up we’d kicked it, so I was a coward and I’m led to believe it (the ball) wobbled through, so thank God I didn’t watch it. To have lost that game when we got in front would have been a real kick in the teeth, I think.”

Gary Ayres (Adelaide): “Their ability to get an advantage play out of the stoppages probably hurt us in the end. They (the Crows) obviously feel very, very ordinary. You give as much as you can and unfortunately we had to be the loser tonight. I think we’re playing some pretty reasonable footy. We’ve lost our three games by eight points (to St Kilda), 12 points (Port Adelaide) and five points (Collingwood), so we’re around the mark.”