A buoyant Essendon coach Ben Rutten wants the Bombers to use the stirring win over Hawthorn as the catalyst to turn their season around, as stories emerge of the dire situation which confronted the club before the game.

Rutten was driving to Marvel Stadium on Saturday night when he learned of the fifth and final late withdrawal from the club’s doctor after a virus swept through The Hangar during the week.

The Dons, who lost Jordan Ridley, Jake Kelly, Matt Guelfi, Alec Waterman and Sam Durham to illness, were forced to pluck Devon Smith from the rehab room amid an extraordinary 24 hours leading into the game.

There were another handful of players, including ruckman Sam Draper, who played under duress having been sick during the week, Rutten revealed after the Bombers’ come-from-behind 27-point win over the Hawks. Draper was one of several Dons who lifted late. 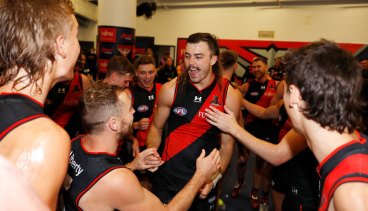 Sam Draper was all smiles as the Bombers celebrated their win.Credit:AFL Photos

Listed emergencies Brayden Ham, Kaine Baldwin, Brandon Zerk-Thatcher and Aaron Francis were called into the side as was Smith, while youngster Alastair Lord made his debut as the sub. Francis was the most influential of the late ins, kicking two goals.

A proud Rutten praised the selflessness of those who withdrew, and the resilience of the players who overcame an interrupted preparation.

“There’s some really nice stories from there, the guys who came up and played,” Rutten said. “Sometimes it takes a fair bit of courage not to play as well, especially when you know other guys are dropping around you.

“Sometimes you feel like the best thing you can do is play. The guys made very clear, responsible team-first decisions and the guys who stepped up and played on late notice and came out and performed.”

Smith had been on a strengthening program for his knee but answered his club’s call.

“He’s got a bit of a degenerative knee,” Rutten said. “We thought it was an opportunity to spend a couple of weeks to get some good work into that, the muscles around it and get some good conditioning into him to make sure he can perform at his absolute best the rest of the season.”

The Bombers, two games and significant percentage out of the top eight, were also 2-6 last year before mounting a late run to make the finals. They have been one of the most disappointing teams this season but their morale should be boosted by the backs to the wall nature of the victory.

“We came together as a group, it’s one of those games you certainly hope it galvanises the group,” Rutten said.

“It certainly galvanised the group that was here today. There were some injured players in the rooms afterwards, a really good feeling in there.

“To get the reward in unique circumstances today, I think it’s going to be good for the group, definitely.”

Hawthorn coach Sam Mitchell was critical of his team’s performance in the second half. On top at half-time, the Hawks were well beaten in the contest and at stoppages after the long break. They were smacked 9-1 at the centre clearances, which allowed the Bombers to run all over them and denied the Hawks time in their forward half.

Jai Newcombe’s game mirrored that of his team’s. He amassed 22 touches in the first half, but only six in the second.

“He dropped off and we have to look at why that was,” Mitchell said. “His intensity and energy around the ball is what we need consistently across the game and across every player.

“We couldn’t get that today so unfortunately what you get is that kind of performance where you have some really good moments and sets of play in the highlight reel, but far too many that will be on the opposition. Too many uncontested types of plays where they were able to transition the ball far too easily.

“Jai’s played some good football but he’s played a bit like us and had some inconsistency in our game.”

Mitch Lewis is likely to face Richmond next week but dashing backman Changkuoth Jiath is in doubt, Mitchell said.