Greater Western Sydney star Toby Greene says he’s happy to leave the full-time captaincy to Stephen Coniglio after signing a contract extension that will keep him at the club until the end of his career.

Greene, who is serving as stand-in skipper during Coniglio’s absence due to injury, has added two years to his deal, which will now run until the end of 2026. 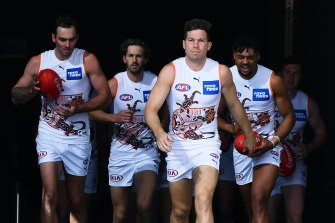 The revised agreement, initiated by the club, is a win-win for both parties. For Greene, it is a fitting reward for his brilliant form and an acknowledgement of his increased market value since signing his last contract in 2018, having established himself as one of the AFL’s biggest stars.

For the Giants, the structure of the 27-year-old’s new deal goes some way towards alleviating the club’s significant salary cap pressure, which intensified as a result of the pandemic and the subsequent squeeze on AFL player payments.

“The club said it [the deal] was there on offer and I thought I’d always be a Giant for life,” Greene said on Wednesday.

“I guess this just confirms it and it’s good to have some security as well going forward. It means a lot.” 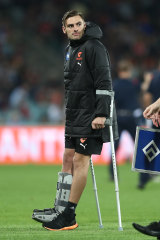 Stephen Coniglio has been injured since the start of April.Credit:Getty Images

With 19 goals in seven games, Greene has been GWS’s standout player and a revelation as a leader, having slowly reformed his bad-boy image.

He was officially elevated to the club’s leadership group last year and, with Coniglio out for at least another six weeks, has been steering the team brilliantly on and off the field. Several AFL pundits, including Essendon champion Matthew Lloyd, have even suggested he should take on the role full-time.

Greene said he had no interest in doing so, backing Coniglio as captain despite question marks over his suitability for the position, which also stemmed from Amazon’s Making Their Mark documentary.

“I don’t think too much of it,” he said when asked for his take on calls for him to replace Coniglio.

“I’m just here stepping in while Cogs is injured. Unfortunately, he’s out for a while but I love what he does, he brings a lot away from the field as well. It’s his role and I’m enjoying playing under him. He does a lot more than me during the week. Hopefully he can get back soon.”

Greene said he never felt any desire to return to his native Victoria. He joins a core of experienced GWS players – including Coniglio, Lachie Whitfield and Nick Haynes – tied to the club on multi-year contracts.

The next cab off the rank appears to be Josh Kelly, who is mulling over whether to activate an eight-year contract option in his favour that will keep him at the club on about $1 million per season.

Kelly is expected to trigger that extension, primarily because the salary is well over what would be regarded as his post-COVID market value, but the 26-year-old is also beginning to rediscover the sort of form that prompted the Giants to offer him the money initially.

“He’s been through it all before so I’m sure it’s not weighing too much on his mind,” Greene said.

“He’d certainly be thinking about it, here and there, and a lot of guys are asking questions, but we’re not putting pressure on him. He’s going about it the right way and he knows how to handle it as well.

“He’s been really good. On the weekend, having him and Whitters [Whitfield] on the wing, it adds a lot to our game. It’s been great. He’s building and he’ll continue to do that.”