In an age where footballers can have their programs planned to the minute, it's fair to say Sam Jacobs' training regime during lockdown was far from ideal.

To keep fit, he clocked miles on the rocky, dirt tracks on his in-law's farm in Arthurton, about two hours north-west of Adelaide and a long way from the lush green fields of Tom Wills Oval at the Giants' headquarters. 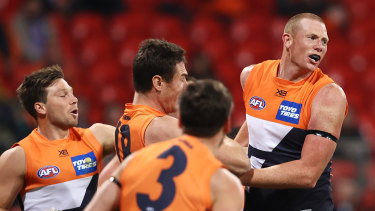 For elite athletes, training is as much getting the body ready as it is the mind so they can be confident in their preparation. Jacobs had it going into round one, not so by round two.

"You come back with doubts as opposed to when I was going into round one I was confident," Jacobs said. "I had a really good strong block of training behind me, I felt really ready to go.

"Having that real sharpness I had from round one just took me a couple of weeks to pick up again.

"I feel like I'm trending back up now. It's nice to be back in the team and hopefully have a real strong finish to the year."

It is little wonder then that the 32-year-old struggled when the season resumed. After two below-par performances, the former Crows ruckman was dropped, only returning last week. 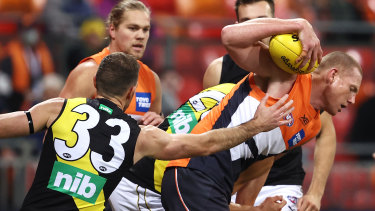 Giants coach Leon Cameron has said publicly the ruck spot remains up for grabs. Jacobs and Shane Mumford have split the role but, if neither can make it their own, Cameron has indicated he will give Matthew Flynn and Kieren Briggs a shot.

"He hasn't said that to us exactly, but you know that's the go," Jacobs, who is contracted until the end of next season, said. "He wants the decision made for him, which all coaches do.

"We're both on opposite ends: me and Mummy are getting to the back end and we have two young guys who haven't debuted yet. There's no one there in the sweet spot of their career just at the moment. It's there for someone to take it."

A key player when Adelaide were a premiership challenger in 2015-17, Jacobs lost his place to Reilly O'Brien last year but was eager for one last crack at an elusive flag.

"That was a big part of coming to GWS – I felt we were in a really strong position to challenge for one," Jacobs said.

"At the moment we haven't started well; we've been a bit inconsistent with our performances, but we've played some really good teams. I'm really confident as the years gets on we'll be right there when it matters most."

Jacobs, too, feels as if his game has turned the corner. Having only four games under his belt at the Giants with Josh Kelly, Stephen Coniglio and co at his feet, there should be plenty of improvement to come in the Giants' centre square work, which has been a strength in recent seasons.

"It does take time to build that," Jacobs said. "It doesn't happen overnight, but we'll continue building that and now we're in the hubs, there's more time to get to know each other and work closely."