The club is planning to lodge paperwork with the AFL on Monday to force the Cats into a trade for the 2019 Coleman Medal winner, according to a source with knowledge of the Giants' decision. 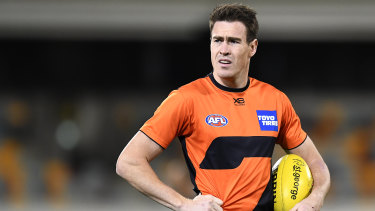 Cameron will need to be exchanged in a trade. Credit:Getty Images

While the Giants had indicated from the outset that they would likely match the Cats' offer for Cameron – believed to be a five-year, multi million dollar contract – the confirmation of their intention to do so is significant given how rare such a move is.

In the history of AFL free agency, a club has never matched a rival club’s offer for one of their unrestricted free agents.

Cameron notified the Giants of his intention to move to the Cats earlier in October, and this decision by GWS comes a day after Geelong secured Hawks winger Isaac Smith as a free agent.

The Age reported earlier this month that the Giants would ask for high draft picks and a high quality player in exchange for Cameron, such as Brandan Parfitt, Esava Ratugolea or Sam Simpson.

Adelaide got close to matching a free agency offer in 2015, when Geelong opted to pursue a trade for Patrick Dangerfield rather than lodging free agent paperwork.

Geelong knew Adelaide were not content with accepting only a compensation pick and that they would likely have matched any offer anyways.

So the clubs were then forced to negotiate a trade, with Geelong getting Dangerfield and a third round pick, and the Crows receiving a first round pick, a second round pick and player Dean Gore in exchange.