Footage taken from a fan at the Punt Road end of the MCG on Saturday was shared on social media and shows Hartigan’s arm collected Walsh high as the Blues midfielder tried to block the Hawk for his teammate Harry McKay. 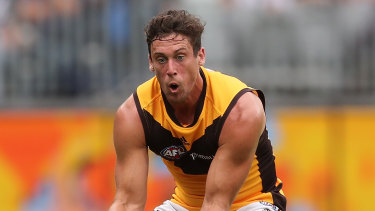 Other incidents from Saturday that could come under scrutiny include Adelaide’s Darcy Fogarty’s hit on Melbourne’s Jake Lever and a match day report on Taylor Walker for a dumping tackle.

Earlier in the round, Richmond’s Marlion Pickett was given a one-match ban for striking Brisbane’s Brandon Starcevich.

The incident was deemed careless conduct, medium impact and high contact. Richmond have the option to challenge the ban.

The AFL will also on Monday make a call on a controversial non-call in the final 35 seconds of the Crows’ one-point win over Melbourne on Saturday.

A deliberate out of bounds free kick was not paid when Nick Murray handballed to the boundary while close to goal in Melbourne’s forward line with the margin at one point.

Had the free kick been paid, Melbourne would have had a shot at goal, but the umpire did not deem it a free.

Footage shown on Fox Footy showed the Murray handball deflected off Charlie Spargo’s hand before rolling out of bounds.