The NRL say referee Ashley Klein allowed play to continue for 40 seconds on Friday night because he had not noticed Sean Keppie heavily concussed, despite the giant Manly prop wobbling around and falling to the ground just metres away from him and a South Sydney play the ball.

Manly coach Des Hasler said trainers wearing the orange shirt needed a direct line to the on-field referees and doctors on the sideline so they could immediately get their attention to stop play.

If trainers abused the privilege by stopping play for “a blister, a cut or twisted ankle”, Hasler told The Sun-Herald they needed to be sanctioned, but it made sense allowing them to be mic’d up to officials.

Keppie was “a bit sick and sore” on Saturday after he was knocked out trying to go low on Souths prop Mark Nicholls in the sixth minute. He got to his feet, but crashed back into the Suncorp Stadium surface, somehow staggered back into the defensive line before making another tackle on Jaxson Paulo.

Commentators and social media could not believe Klein had not stopped play.

“But [play was not stopped because] the referee was not aware of it,” NRL head of football Graham Annesley said. 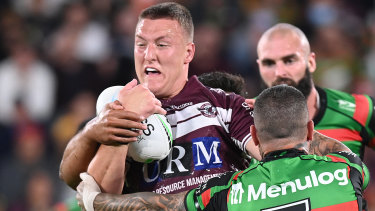 “Even when the touch judge said to stop the game, he [Klein] asked which player he was stopping the game for. I guess he was focused on the ball-carrier and didn’t see it.

“We have the spotters in the bunkers, they see it and immediately notify the sideline. But there’s still a bit of time lost doing that.

“The objective is always to get the players off the field as quickly as possible. And as soon as they were aware of it they stopped play.”

Hasler said last week’s headlines about Penrith deliberately stopping play against Parramatta for an injury, which led to the club being fined $25,000 – the Panthers have since claimed they will “vigorously defend” the charges – had only put more pressure on the referees to make the right call.

“It’s really nobody’s fault. But the game needs to create a strong policy around it. Otherwise it defeats the purpose of [having crackdowns] on head highs, dangerous contact and the image of the game, all that stuff.

“It’s not a blame game. We need a solution. We need to find a process that suits both fair play and health and safety standards.

“The orange shirt needs to be linked to the referee and the doctors on the sideline via mic so they can ask for the game to be stopped straight away.”

Klein and Gerard Sutton, who oversaw the Panthers-Storm clash on Saturday afternoon, are vying for the honour of being in the middle for next Sunday’s grand final.

Meanwhile, Sea Eagles prop Josh Aloiai will miss the opening three matches of next season should he take the early plea for a dangerous throw on Nicholls.