Home » Rugby » ‘He is what he is’: How Goodwin came back from the brink at the Dees

Peter Jackson had heard the rumours about Simon Goodwin’s future.

It was the off-season and Melbourne – whose on-field trajectory had been linear and positive from when he joined the crisis-stricken club in mid-2013 until he left after a preliminary final loss in 2018 – had tumbled.

There were the diabolical lows of 2019, and the improvement but lack of fulfillment in 2020.

According to those who know him, Goodwin was looking over his shoulder. He was contracted for another two seasons, but how much did that really mean?

New chief executive Gary Pert had conducted a football department review, relieving football chief Josh Mahoney of some of his duties. Mahoney – having made several key hires over the years – soon departed for Essendon.

The coach had lost some of his closest allies with the departures of assistant coaches Justin Plapp and Ben Matthews, with Brendan McCartney and Craig Jennings having left previously. 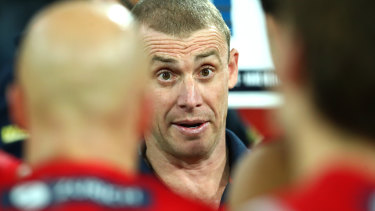 Adem Yze had come back into the fold while the enigmatic Mark Williams had also come on board.

Amid a backdrop of speculation about his job security, Goodwin ploughed on.

Just months later Melbourne are favoured to beat Geelong on Friday night in a preliminary final. From there the Dees would be one win away from returning to the mountain top, ending the AFL’s longest active premiership drought.

For Jackson, the career administrator summoned by the AFL to fix the broken Demons eight years ago, it would be a moment of immense pride.

Jackson was at the helm when Glen Bartlett’s board hired Goodwin to be Paul Roos’ successor at the end of 2014.

Roos, having already pulled off one magnificent succession move at Sydney, was as Jackson notes, there “for a good time not a long time”.

Jackson liked what he saw in Goodwin but accepted he was not yet the finished package.

“He was a very young coach, a very inexperienced coach,” Jackson said. 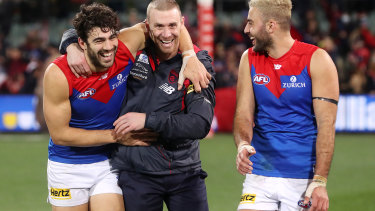 “He was always going to grow into the journey, and it appears as though he has rather well.”

On the back of a steady year-on-year rise, it appeared as though the journey was progressing swimmingly.

Goodwin is an intense man. A fitness fanatic, he paced around the car park at Perth’s Joondalup Resort over the last couple of weeks, much to the amusement of some of his players.

A workaholic, he does not relish the limelight. But one recent former Demon said Goodwin was “a very holistic coach”.

“It’s not just all about football, it’s about developing people and how they can get the best out of their footy and lives,” the ex-player said.

“He’s always looking for the players and staff to get the best out of their careers and lives in general. [He] opened up the footy department’s office so they can see each other and make it more of an inclusive culture in that respect. Overall, a guy that knows how to get the most out of his players, but also as people too.”

Goodwin has been keen over his tenure to think outside the square to gain an edge. 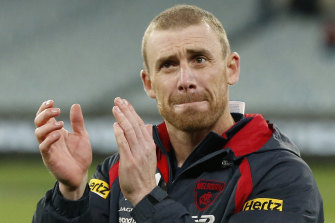 Last year he wanted to bring energy healer Charlie Goldsmith into the club to work with players, a move that ultimately did not materialise.

Sources indicate his relationships with players have largely been positive, and even in the depths of 2019 he never hung any out to dry publicly, even if player faith did waver as the wins dried up.

“He’s very determined to succeed and has the intensity that goes with it. He’s not the most outgoing type of guy. And in the football world, sometimes that annoys people,” Jackson said.

“He is what he is. He’s always believed that the most important thing is to build that relationship with the players.”

But Goodwin’s style wore thin with some club staffers, and his dogged adherence to the virtues of contested ball didn’t stand up without results.

A poor pre-season, one blighted by injuries, explained some but not all of Melbourne’s annus horribilis that was 2019, as the Demons sunk to 17th on the ladder.

The Demons hoped they could bounce back immediately, and a COVID-19-marred 2020 campaign yielded a significant rise to ninth. But ninth was not enough. A supporter base that had waited for a decade were coming to terms with the possibility that they had lived through another false dawn.

Would Goodwin hang on?

“I knew he should have been given the chance to see it through. I’m glad he was. You never know what football clubs are going to do, but in the end they stayed the course. I wasn’t there,” Jackson said.

“I heard a lot of rumours, which disturbed me a bit because a guy’s got to be given a chance to develop and grow. I’m glad we got to where we got to.”

The turning point appears to have come in the pre-season. As discussed by skipper Max Gawn in an early-March interview with The Age, Demon players made a pact to be more selfless, desperate not to squander the clearly vast talents of a list that had been amounting to less than the sum of its parts.

As the saying goes, Melbourne’s success has had many fathers: the recruiters, the players, fitness chief Darren Burgess, Goodwin, Williams, Yze, the list goes on.

It is ultimately impossible to accurately apportion credit for what the Demons have achieved.

The other half of that saying, of course, is that failure in an orphan. That is not quite right in this instance, as there had been casualties of the 2019 and 2020 campaigns. How close Goodwin came to being the biggest one of the lot may never be fully known.

“Unfortunately a lot of clubs always blame the coach, but it’s always much more endemic through the whole club,” Jackson said.