The majority of the Red V faithful were stunned to learn on Tuesday the club’s best player would move to the Sharks next season on a four-year deal worth north of $2m. 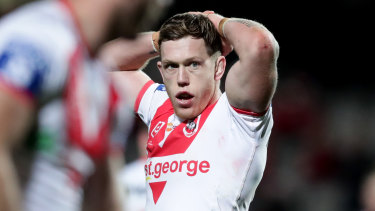 Cameron McInnes is off to Cronulla on a four-year deal.Credit:Getty

The Dragons and new coach Anthony Griffin have poured a lot of their efforts into signing another hooker, Andrew McCullough, for this season, and had not even tabled a formal offer to McInnes.

McGregor and McInnes shared an emotional brace after the coach’s final game in charge of the Dragons midway through last season at Parramatta, and ‘Mary’ noted at the time how the joint venture needed to do everything to keep the 27-year-old in the red and white.

McGregor on Tuesday was disappointed for Dragons fans but delighted his good mate secured himself a new deal at a club where he is likely to be utilised as a lock forward rather than a No. 9 where Blayke Brailey is seen as a future representative dummy-half.

“It is not for me to question the direction of the club and their decisions on recruitment and retention, however I am happy to comment on the character of Cameron as a player and a person,” McGregor told the Herald.

“He is a leader that demonstrates and reinforces what is acceptable and unacceptable in an organisation. His behaviour and standards are professional. Cameron refuses to lower his own standards to accommodate those who refuse to raise theirs.

“He has good footy IQ, plays with passion and has a high threshold for pain with a team-first mentality that does not quit.”

McInnes met with Cronulla coach John Morris before Christmas. Wests Tigers coach Michael Maguire also met with McInnes, but the Tigers also never got to the stage of tabling an offer.

The hard-working forward who was called into last year’s NSW Origin squad wanted to sort out his future before the competition kicked off, but the Dragons were in no rush. The club’s general manager of football Ben Haran conceded as much when he said: “With our club going through a significant transition, it’s fair to say Cameron and the club were working on different timeframes.” It remains to be seen if McInnes is retained as the skipper for his final year.

McInnes was not fazed by the uncertainty surrounding Sharks coach John Morris who remains unsigned beyond this year. The Dragons face the Sharks in round one.

Cronulla CEO Dino Mezzatesta told the Herald last week they had no deadline on Morris’ future, and was mindful current players and potential recruits will want clarity on who will be in charge.

“But right now nobody is panicking and saying, ‘we have to do things immediately’,” Mezzatesta said.

“I’ve heard people say, ‘you have to wait until after round four’ or ‘wait until midway through the season’ … what we are keen to understand is what is best for the club and individual, and not for 2022 but the next five to 10 years. He’s in the current role and he’s in the box seat.”

Paul Green has been linked to the Sharks, along with Cameron Ciraldo and Craig Fitzgibbon, popular and successful assistant coaches at the Panthers and Roosters respectively but who are untried in a head role.