Former England captain Chris Robshaw believes Eddie Jones will make the Wallabies more dangerous at the 2023 Rugby World Cup, by improving the players and instilling a confidence currently missing in the national side.

Robshaw had a unique position in Jones’ swift rebuild of English rugby in 2016, having captained the England team in a disastrous Rugby World Cup campaign on home soil in 2015, where a loss to Michael Cheika’s Wallabies in the pool stages ensured they would not make the play-offs.

Jones, who was subsequently hired to take over from coach Stuart Lancaster, had even criticised Robshaw as just a toiling “club player” in a newspaper column he was writing during the World Cup.

“So as soon he got announced, I was thinking ‘OK, that’s me done’,” Robshaw said.

“But early on we had a very open conversation behind closed doors, and he said if you can go away and work on bits of your game, there will be a place for you in the team, not as captain but as an important player for me.”

Robshaw played on under Jones and featured in the record 18-match winning streak that England then enjoyed, during which the team won the Six Nations in 2016 and 2017 and beat the Wallabies 3-0 in Australia. 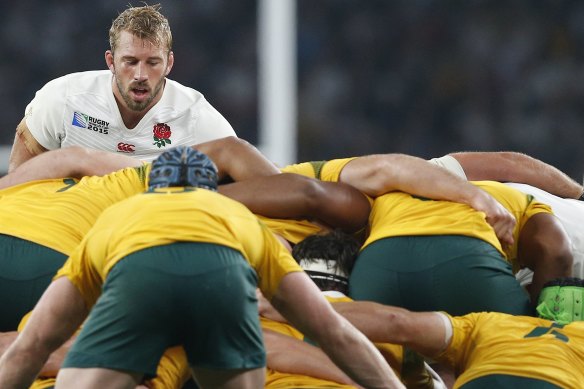 Chris Robshaw playing against Australia at the 2015 Rugby World Cup.Credit:AP

“You have got yourself a very good coach who can definitely come in and shake things up and also fix things quite quickly,” Robshaw said.

“He is proud of his Australian heritage and he definitely wants to help them move forward. From an English point of view, it is a bit of a shame because you look at what he’s done in World Cups and stuff like that.”

There are less than eight months until the World Cup begins, and Jones will be in charge for just five Tests before then. But Robshaw believes his former coach has the track record to produce a first-year bounce for the Wallabies as well.

“From where they currently are … and from the position they were in over the last couple of months over here, I think he will be able to get them up to shape, and if nothing else, definitely improve them quickly,” Robshaw said. 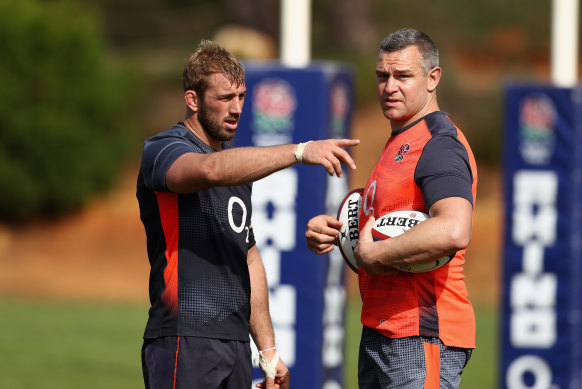 Robshaw talking with Jason Ryles in 2016. The former Australian league player was a defensive consultant for Jones.Credit:Getty

“He will definitely push the players to be better and from a blunt point of view he will make them better.

“He will definitely shake things up there. Australian rugby needs something at the moment, if we’re honest. They’re not in their best place. They had a tough tour over here in our autumn series, but if there is a man who can fix things quickly, it is Eddie.”

“It’s just confidence because like I said, you’ve got good players, you’ve got staff and momentum is a massive thing in sport, and especially when you’re on the road,” Robshaw said. 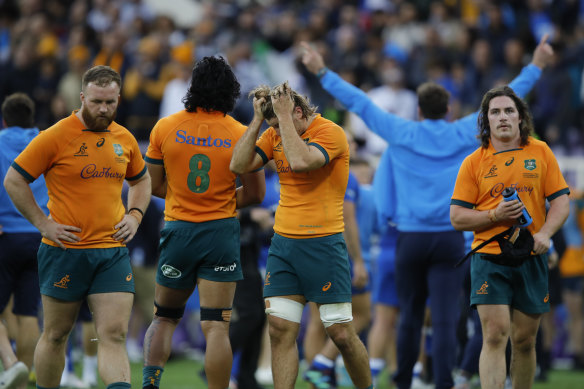 Wallabies players after their one-point defeat to Italy on the Spring Tour.Credit:Getty Images

“I think for Eddie if he can come in and give them that bit of momentum and that bit of confidence, I think he’ll be able to get him back on out to where Australian sport generally is and it’s pretty successful, it’s pretty combative.”

“There were tests along the way, I remember in our first camp where we had 6am walkthroughs,” he said.

“But when we got there, there were no coaches. I am sure there cameras hidden around to monitor “what’s the mindset of these guys? Are they going to be professional and get straight on with it or are they going to wait 10 minutes, muck around, kick a ball and go home?”

“It is those types of things where he will give you a bit of freedom and go ‘what level are these guys at, and how far can I push them to get better’?”

Watch all the action from the Six Nations with every match streaming ad-free, live and exclusive on Stan Sport from February 5.