Home » Rugby » Hodge named at No.10 for Wallabies as Rennie axes Lolesio, Simone

The Wallabies will field their third different five-eighth in four Tests after coach Dave Rennie handed Reece Hodge a start at No.10 for Australia’s final Bledisloe hit-out as part of six changes to the starting XV that was thumped by the All Blacks on the weekend.

Rennie has wielded the axe by dropping Ned Hanigan, Noah Lolesio, Irae Simone, Filipo Daugunu and Dane Haylett-Petty from the starting XV, along with the forced change of Lukhan Salakaia-Loto due to injury, as well as handing debuts to Lachlan Swinton and Tom Wright plus a potential first start for NSW youngster Angus Bell off the bench. 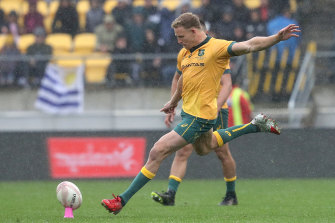 Reece Hodge will wear the No.10 this weekend against New Zealand. Credit:Getty

With the Bledisloe Cup now out of Australia’s grasp for another year, Rennie has once again sliced and diced his back line for the fourth match between the sides this year.

James O’Connor, who didn’t feature in Australia’s horror 43-5 loss in Sydney due to injury, is still recovering from a knee complaint.

Many thought Rennie would stick with Lolesio if O'Connor was ruled out but the 20-year-old has been relegated to the bench. It comes as Irae Simone was left out of the matchday 23 altogether after the pair's scratchy showings on debut.

Rennie said after Saturday's match he wasn’t going to throw Lolesio under the bus but clearly wants to see how Hodge will fare at No.10 for Saturday’s dead rubber at Suncorp Stadium.

Wallabies team to face All Blacks in Brisbane

Hodge has worn the Wallabies No.10 jersey once in his 42-Test career – against Japan in 2017 – but has been training at five-eighth over the past few weeks.

From 60 Super Rugby appearances, Hodge has started at No.10 on five occasions.

The Wallabies will also field an all new midfield combination, with Hunter Paisami and Jordan Petaia taking their place at No.12 and No.13 respectively.

Brumbies flyer Tom Wright will make his Test debut and replace Daugunu on the wing, while Tom Banks returns at fullback in place of Haylett-Petty.

As reported earlier, Lachlan Swinton will also get his first chance on the international arena, doing so at No.6 as the Wallabies look to continue their decent record at Suncorp Stadium.

Rob Simmons comes back into the starters to replace Salakaia-Loto but Rennie has stuck solid with the same front row, including loose-head prop James Slipper who will bring up his 100th Test.

On the bench, Bell, the 20-year-old Waratahs prop, is in line to debut in place of Scott Sio, while Jordan Uelese and Fraser McReight have both been left out of the side this week.

Meanwhile, Beauden Barrett has been named at No.10 for the All Blacks, who have made a number of changes to the side that recorded their biggest ever win over Australia.

Akira Ioane, Asafo Aumua, Cullen Grace and Will Jordan have all been named to make their debuts.