Carlton have had two incarnations of their own “mosquito fleet”. There was the fleet-of-foot, small forwards-midfielders of the late 1970s and early 1980s, which helped raise three premiership flags within four years, while 30 years later a new group under Brett Ratten emerged.

And now the Blues are building their third team within a team, a must-have in the modern footy world where pressure inside attacking 50 is paramount. 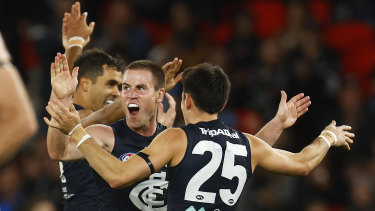 Motlop, who has given himself the nickname “Deadly”, will add to a group of pressure and goal-kicking small forwards, including Corey Durdin, Matthew Owies, Zac Fisher and even midfielder Jack Carroll, that must find a way to prosper without injured Coleman medallist Harry McKay, who, if not marking, brings the ball to ground. 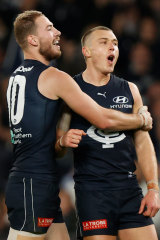 Patrick Cripps (right) is in top form and the Blues are better placed than they have ever been in his time at the club.Credit:AFL Photos

Voss wants his small forwards to go about their business as usual, and that’s a good thing. The Blues rank third for tackles inside 50 this season (11.5 per game). Owies (17) leads the way not only at Princes Park but across the league, ahead of Kysaiah Pickett (16), Stephen Coniglio (15), and Sam Switkowski (15), heading into round nine. Durdin (10) has also brought the heat.

Jack Martin, the silky goal-scoring leader of the fleet, is missing, but George Hewett (two goals), Adam Cerra (two), and Sam Walsh (one) are frontline midfielders who can score when given the chance.

McKay’s absence means there will be greater focus on fellow tall Charlie Curnow, enjoying a team-high 25 goals and sitting fourth across the league for total scoreboard impact, and the under-rated Jack Silvagni, who has been named at centre half-forward in a side enjoying a top-four berth at this point of the season for the first time since 1996.

Skipper Patrick Cripps, arguably the competition’s most in-form player, has gone forward more and lifted his goal-kicking output this season (13 goals, the equal most for any season in his career), but the Blues hope their small forwards will still prosper despite McKay’s absence.

“You have got to be careful. You can’t just rebrand yourself in seven days. We feel like we have a style that will stand up with some further constraints thrown at us,” Voss said.

“That’s certainly one of those constraints. There is not as much tall timber up front but, when we do get the ball on the deck, we can bring the pressure. Hopefully, we can bring that on the weekend.”

The absence of Martin will hurt, but Cerra said “the next-man mentality” will ensure the Blues remain potent.

Blues supporters know the current small forwards do not yet match up to the likes of the hard-running (and hard-partying) Wayne Johnston, David Glascott, Alex Marcou, Jimmy Buckley, Rod Ashman, Wayne Harmes and Ken Sheldon circa 1979-82, nor the likes of Eddie Betts, Chris Yarran and Jeff Garlett circa 2010.

Regardless, Voss wants his small forwards to maintain the belief they have had through the season, whether that be in their tackling rate, overall pressure, or ability to hit the scoreboard when the opportunities arise.

“We certainly have a group out there that we feel can play the way we want to play,” Voss said. “[The] guys we bring in are in really good form. We go up there confident in what we want to do, especially with the results we have had over the last couple of weeks.”