He has been back a few times. Demetriou even organised a training camp on Mitchell’s property before Christmas, only for Tom Burgess to be struck down by COVID-19 and the playing group forced to return to Sydney a few hours later.

One of the best things Demetriou has done in his first year as head coach at Souths since taking over from Wayne Bennett is establish a solid relationship with club superstar Mitchell.

“He came to Taree to see what I was about and we found that mutual ground and respect early,” Mitchell told the Herald.

“I look up to him. He’s done really well for himself, but even he will tell you the job isn’t done.”

Like Demetriou, predecessor Bennett always appreciated the need for human connection, and also made a couple of hit-and-run trips to Mitchell’s farm. 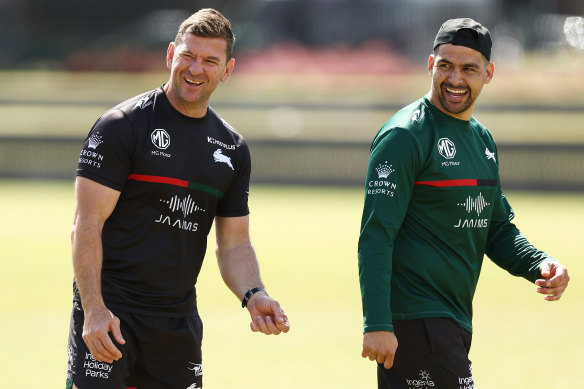 Jason Demetriou with Cody Walker during a training session.Credit:Getty Images

“You build a relationship with him, which you need to do with all your players. [But by doing so] Latrell didn’t have to worry about a new coach coming in and how things were going to be at Souths. They all knew how it was going to be.”

Demetriou played down the efforts he had made getting to know Mitchell. He should not, because keeping Mitchell happy is the main reason Souths are 80 minutes away from a grand final.

The bond is also a key reason Mitchell is expected to sign a contract extension that could be as long as four years.

Players do not commit for such a long time unless they have a strong relationship with the coach.

“I first visited ‘Trell’ on his farm at the end of 2020. I wanted to see him in his own environment.

“It’s hard to get to know someone if you don’t see them in their happy place. I got a feel for what’s important to him. He grew up there, it’s where his family lives, and it’s where he’s most comfortable.”

Demetriou said the “care factor” for players came from working under Bennett, whom he refers to as “the big fella”. 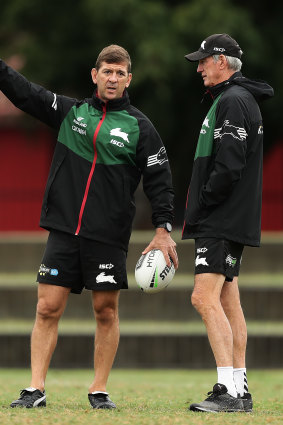 Jason Demetriou with Wayne Bennett during the 2020 season.Credit:Getty

The proud Indigenous history of Souths meant that when Demetriou pencilled in a visit to the remote community of Yarrabah, on the outskirts of Cairns, during a pre-season camp, the players were treated like rock stars.

He also wore a traditional Tongan necklace in the coach’s box in round three, which doubled as a relief round to raise money for the Pacific island after the eruption of an underwater volcano. The gesture was not lost on the Tongan players.

“It’s not something I consciously think about, it’s just a way of me showing I value who they are and where they’re from as men and as a person,” Demetriou said.

“You don’t want to be known as that guy who just sits in his office and tells you if you’re playing first grade or not. Those little touches are important.”

Demetriou recalled playing at Wakefield in England and the lessons learnt from being coached by John Kear.

“‘JK’ was similar to Wayne in terms of valuing the player-coach relationship, and getting his players motivated to play every week,” Demetriou said.

“I’ve enjoyed this year. All the systems were in place for me. I was a part of helping build those systems. It’s been a big advantage in terms of transitioning.

“One of the first conversations I had with Wayne when I first joined him at Brisbane was, ‘you need to think and act like a head coach, and that’s why I’ve brought you here’.

“To work under someone with no insecurities, and was comfortable to develop, was massive and a huge benefit for me.” 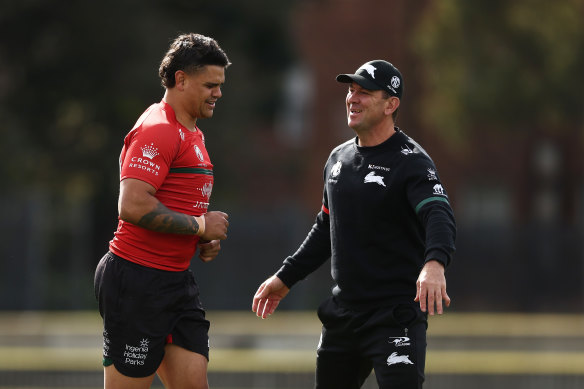 Jason Demetriou at training with Latrell Mitchell in August.Credit:Getty

Bennett is tired of the narrative about his assistants flopping once he has left the building. It happened to Ivan Henjak, Steve Price, Rick Stone and Anthony Seibold.

But as Bennett politely puts it, when it came to Demetriou and bucking that trend: “JD has been a bit smarter than most of the other guys I’ve worked with because he hasn’t tried to reinvent the wheel.”

Bennett always had a sense for getting his teams to peak in September.

After a horror run with injuries, including a hamstring blow for Mitchell as well as skipper Cameron Murray’s shoulder setback, Demetriou’s class of 2022 is humming at the right time. He does not put it down to luck.

The loss of Alex Johnston to a hip-flexor injury hurts, but Richie Kennar is no stranger to the top flight.

Souths players speak about Demetriou being more hands-on than Bennett. He conducted most of the training sessions last year.

Forward Jai Arrow also pointed out Demetriou produced some old-fashioned anger when needed. The coach sent a message to trainer John Sutton during a game earlier this year, telling Arrow he was not tired and to keep going.

During a game earlier this year, Arrow told trainer John Sutton he was done, and later learnt it was not a wise move. He was told by his coach he was not tired and to keep going.

“I probably can’t repeat what JD said that day,” Arrow said. “He made it clear he needed me to be better, and that honesty is all you want from your coach.”