Home » Rugby » ‘I know nothing’: Bennett denies any knowledge of Burgess allegations

Wayne Bennett claims he had no knowledge of the serious allegations levelled at Sam Burgess and has revealed team doctor Andrew McDonald will be on duty for the Sunday's finals clash with Newcastle.

Burgess stood down from his roles as Rabbitohs coaching assistant and Fox Sports commentator following the explosive allegations aired in The Australian. NSW police have launched their own investigation following claims of drug use and domestic violence. The report claimed that South Sydney was privy to the allegations but covered up for their star player. 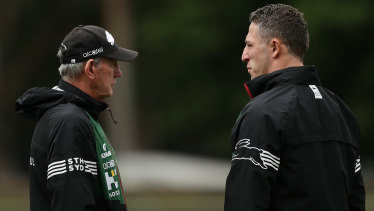 Rabbitohs head coach Wayne Bennett (left) says he was unaware of any of the allegations against Sam Burgess before they were published on Friday.Credit:Getty

"Right now, I'm not going to respond to allegations, I'm sure the club aren't and the NRL aren't.

"I will keep my powder dry because you might be wrong."

According to The Australian, McDonald treated Burgess with a tranquiliser to calm him during a drug-fuelled episode, but wrote the prescription in somebody else's name. It was also alleged that another doctor arranged blood tests for Burgess under a different name, with that test then alleged to have returned positive signs of a number of recreational drugs including MDMA.

NRL chief executive Andrew Abdo on Friday indicated McDonald had stood himself down pending the investigation, but Bennett said he would continue his duties with the team on Sunday. 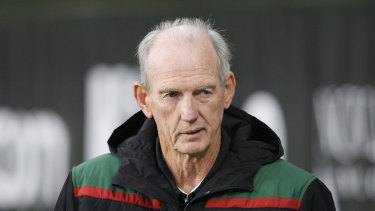 Wayne Bennett says he wasn’t privy to the allegations levelled at Sam Burgess.Credit:Getty

"The team doctor is one of the most honest people I've ever met and worked with," Bennett said. "He's been here for 25 years. Anyone who knows the team doctor knows his ethics and he does a great job here. I wouldn't be jumping the gun about what the club doctor has done or hasn't done.

"I've never heard a rumour around the club about Sam Burgess taking drugs."

The dramas threaten to derail the Rabbitohs' finals campaign just a week after a record 60-8 win over arch rivals and premiers the Roosters. However, Bennett said the Burgess revelations would have "no impact" on the performance against the Knights.

"It will not affect the team in any shape, form or manner," Bennett said. "You have to understand that, no matter how much it may excite you to think it may affect us.

"I can tell you categorically that it will not affect us, it has not affected us.

"Sam is an important part around us, a great bloke. The bottom line is there isn't a big impact on us in any shape or form."

Bennett brushed off suggestions he knew, or should have known, about the Burgess allegations.

"Listen to what I'm saying, will you – I don't know of any allegations against Sam Burgess at all before the last 24 to 48 hours.

"It hasn't been an issue, nobody has brought it up with me. You're talking to the wrong guy here if you're trying to get information."