Home » Rugby » ‘I milked it’: Arrow admits staying down to get rookie Rooster binned

Jai Arrow admits he “100 per cent milked it” by staying down after being punched in the back of the head by rookie prop Daniel Suluka-Fifita during a heated clash between arch-rivals South Sydney and the Sydney Roosters on Friday night.

Arrow, who has become the Roosters’ public enemy No.1, expected to be targeted by the tricolours after he had shoved a concussed James Tedesco’s head into the turf during Origin III last year. The Souths and Queensland enforcer said he respected the Roosters for standing up for their skipper. 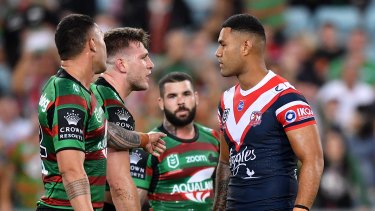 “I felt the back of my jersey come up and the fist in the back of my head. It didn’t hurt me at all, but I thought, ‘I’ll make him pay for this’. I stayed down and once I heard the ref blow the whistle I pointed at him and said, ‘See you champ, you’re off’.

“I respect they came out and played aggressively, but I wanted to play smart and I thought I did that. He [Suluka-Fifita] didn’t say anything to me afterwards. I shook his hand after the game and wished him all the best for next week. He nodded. I won’t hold a grudge. I knew it was all coming. I respected the way they wanted to look after their teammate [Tedesco].”

Already celebrating after picking up two points in his first Rabbitohs-Roosters derby, Arrow was even happier after getting a photo with Hollywood star Chris Hemsworth in the sheds.

“He pulled his shirt up and I had to look away because I was going to leave my missus for him,” said Arrow, who is dating Taylah Cannon, a former Miss World Australia.

“You can’t do that [punch] in our game, it’s pretty simple,” he said. “Expressing yourself that way is not the way to go.”

Jared Waerea-Hargreaves did his best to antagonise Arrow and would have been disappointed with his own discipline.

Meanwhile, Adam Reynolds said he had no interest in a one-year extension at Souths but would not let his contract talks become a distraction for the playing group.

Souths are refusing to budge on their offer to the skipper, who wants long-term security for his wife and their four young children.

“I can’t see myself doing a one-year deal at the moment,” Reynolds said. “I understand where the club are coming from, but does it make me happy? No.

“I feel like I’ve still got a lot to offer.

“The one thing I do know is it won’t become a distraction for the group. As players we’ve got a job to perform and whether my contract stuff keeps ending up in the papers, I’ve told the club and the boys I’m fully committed to this season regardless of whether I’m here next year or not.”