Home » Rugby » ‘I regret it’: Jurrah’s mixed feelings ahead of Dees’ grand final

Proud of what his former club and teammates have achieved, Liam Jurrah admits Melbourne’s grand final berth leaves him with feelings of regret for what might have been.

But the former Demons high-flyer says he remains in touch with Dees skipper Max Gawn, while hoping that his teenage son follows his footsteps into the AFL. 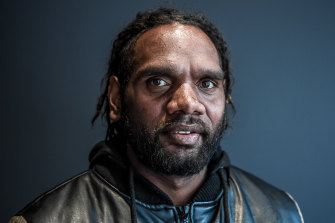 Jurrah, who turns 33 this week, was football’s ultimate shooting star, burning brightly but briefly across 36 games in four seasons that yielded 81 goals and umpteen moments of brilliance for the Dees before he was delisted at the end of 2012 amid legal troubles in his native Northern Territory.

He has since had several stints in jail, including one for breaching a domestic violence order.

But speaking on Sunday from Alice Springs, Jurrah said he was “in a good place now” and that his life was back on track. 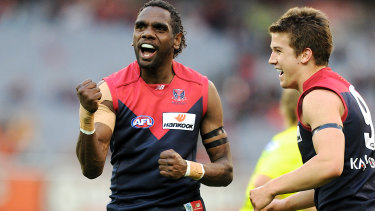 Most of Jurrah’s teammates from his time at Melbourne are no longer at the club.

But Jurrah said he had been in contact with Gawn, and the retiring former captain Nathan Jones ahead of the Dees’ grand final appearance against the Western Bulldogs in Perth next Saturday night.

Jurrah acknowledged that his career – impacted by a tribal dispute that divided his hometown of Yuendumu – had ended too early.

“I regret it. I just look back and regret it. I loved the moments when I was at the club for a couple of years,” Jurrah said.

Jurrah, whose father Leo died earlier this year, said his family members had been reminding him of the missed opportunity.

“All my family’s saying ‘you should have been there playing in a grand final’. I regret it.”

But that’s not to say Jurrah isn’t proud of what he achieved during his career in the AFL, which included taking the mark of the year in 2010 and leading the Dees’ goalkicking with 40 majors in 2011.

“I’ve been loved by a lot of fans in Melbourne,” he said.

“I still get messages on Facebook saying how much they love me.”

Jurrah’s son Ivan, who will soon turn 16, has been picked to play for NT Thunder and will next week head to Darwin.

Together they have played together for local Alice club Westies.

“I would love to see [him make the AFL] and fingers crossed. I told him to enjoy himself and that the most important thing in life is to have fun when you’re still young.”

As for the grand final, Jurrah will be watching – although some members of his family are actually Bulldogs fans.