When Peter V’landys first came onto the ARL Commission just over two years ago, he promised to slash costs — by making staff use Opal cards to get around town.

Horrified by reports that former chairman John Grant and other executives were using expensive hire cars, the thrifty new commissioner from racing was ready to make his mark. 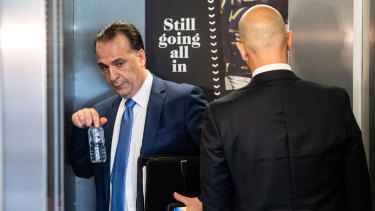 While it also announced a $40 million rescue package for all 16 clubs, as the RLPA continues to mull over its $24.6m rescue package for the players, the really interesting number spat out of head office related to executive salaries.

Chief executive Todd Greenberg and the rest of his team will be taking 25 per cent pay cuts. So, too, will V'landys and his commissioners.

Seems rather light, don't you think?

Sure, 95 per cent of staff have left the building, and Greenberg and others will be taking leave without pay if they are eventually stood down, but it appears to be a small price to pay when others across the sport are taking enormous hits.

And that includes the players, who are looking at a 46 per cent pay cut for the year having already been paid for five months since the rugby league financial year started on November 1.

Then again, what choice do the players have? How loud can they complain? What will they do if they don’t get what they want? Strike?

Two years ago, they wanted to be "genuine partners" in the game and were given 29.5 per cent of revenue? That revenue is about to take an enormous hit without any broadcasting revenue.

In the space of just two weeks, this is what rugby league has become: a raft of stakeholders playing poker with really bad hands, wanting money that doesn’t exist and guarantees that can’t be made, while also blaming each other for a situation created half a world away.

Things are getting ugly.

Former South Sydney football boss Shane Richardson is getting whacked from all angles like a pinata since announcing last Thursday he was leaving the club to help ease the financial burden.

Co-owner Russell Crowe labelled the move an "incredibly selfless gesture" – but others have called bullshit, with some reports estimating Richardson’s payout is worth as much as $500,000.

Richardson was more than happy to talk last week when he did some whacking of his own, specifically calling out former ARLC chairman John Grant and others across the code for being "greedy".

Alas, he had nothing more to add on Monday when asked to clarify just what his severance package looked like. All Crowe would offer was this: "I stand by my remarks".

The best this column can squeeze out of the club is that Richardson will be paid a consultancy fee for this year and next — as reported — as well as others benefits like annual leave that is owed to him.

Only Richardson and Souths know what that figure looks like.

But if there has been a substantial payout as speculated, questions must be asked of the club as much as Richardson.

How could Souths agree to that in these fiscally challenging times — not least with the club leading the charge against Greenberg and the NRL about its exorbitant costs?

There’s already a strong prediction that few members of the NRL executive will survive when the dust settles and the competition resumes, whether that is this year or next.

Greenberg’s job was already on the line before the coronavirus pandemic turned the power struggle between him and V’landys into an afterthought.

What emerged in a conference call with about 35 players over the weekend was a great mistrust between the playing group and head office.

Not all of it is warranted.

Some players wanted to know why only $20m was sitting in their retirement fund instead of $30m.

Greenberg explained that under the terms of the collective bargaining agreement, the total amount didn’t need to be in the fund until the end of 2022.

The confusion is understandable.

In these uncertain times, you ask for every cent owed to you because you don't know where the next one might come from.