Andrew Davey has lost count of the number of times he was sat down by a loved one and told to give up on his dream of playing first grade.

Some would point out how many years he had been trying to crack into the NRL. 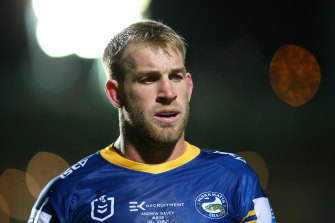 Andrew Davey took what he describes as the “scenic route” to his NRL debut in July and will line up for Manly in the upcoming season.Credit:Getty

Others would tell him to come back to his home town in Mackay. But nearly all of them would point out his age.

Then, at 28 years and 233 days old, Davey became the fourth-oldest debutant in the history of the NRL when he ran out for Parramatta in round 10 of the 2020 season.

But his real big break came after round 18 against the Panthers when Davey got a call from his manager.

Manly were offering the "rookie" a two-year contract. Not only were they offering a deal, but also the money Davey had been waiting most of his life to finally see.

Davey gave up life as a reputable carpenter in the area and local league captain to pursue his boyhood dream of becoming a first-grader.

Packing up his car in Queensland and driving south to join the Eels squad in 2019, Davey headed for Sydney with a simple dream: to be given a contract worth enough money to support his partner of five years.

But disaster struck soon after the Manly deal arrived. Davey's partner, with whom he had been in a long-distance relationship with for three years due to his rugby league dream, decided to break things off.

"I keep saying to people this has been the best-worst year of my life," Davey said.

"I always a battler just for an opportunity and finally I was given something of worth so I could have my life all together … but COVID-19 took its toll." 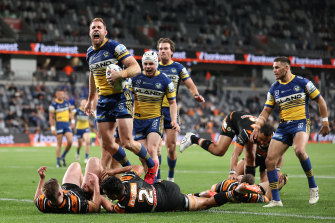 Davey and his partner had been unable to each other for seven months due to both the NRL bubble and border closures.

"It was hard to leave when I did but it was my last opportunity. If I didn't take it, that was it," he said.

"When my manager rang me and told me what money I was on [with Manly], I was thinking, how good. I am going to be an NRL player and get to have my partner and be in a financial position to support her. Finally, I had had a win."

"I proved I was worth it. I proved that I was capable of being an NRL player, but then I lost my partner on top of it."

"I've worked too hard to be here," he said. "I just want to be able to say that I was a consistent first-grader, not just a fill-in and make my own little piece of legacy."

Davey said he had already been welcomed into the club by senior figures like Kieran Foran and Daly Cherry-Evans, who had been "so good" to him during this year's short pre-season period.

"It's funny when you're my age and come into the system, and I'm only new to the system, I'm not playing with players that I watched growing up," he said.

"A lot of kids play when they're 20 and they've watched their heroes play and they get to play with them."

Heading into next season, Davey is hoping to send a message to kids and men alike that it's never too late to achieve your life goals.

"I don't know how many times I was ridiculed for what I was doing, people saying what are you doing that for, you're never gonna make it," he said.

"But I wouldn't change it because I've done something that I'd always dreamed of doing, I took the scenic route, but I made it and there's nothing stopping someone else from doing the same thing."