Cody Walker has been named captain of South Sydney just four days after a police investigation cleared him of wrongdoing following a late-night incident outside a hotel on the Central Coast.

Walker will wear the armband in Saturday’s clash against the NZ Warriors in the absence of Cam Murray, who will be sidelined for up to a month and is likely to miss Origin I as he undergoes a procedure to clean out the shoulder he had operated on during the off-season.

The tackle by Manly’s Karl Lawton last Friday week, in which Murray was speared into the ground, was not the cause for the fresh injury.

With Murray missing the trip to Brisbane for Magic Round, Walker was given the nod over Damien Cook to lead the Rabbitohs.

Walker was on Friday at the centre of police inquiries following an incident outside a Central Coast hotel the previous week. Walker’s management suggested he had simply been wrestling with his family in the early hours of the morning, and there had been a noise complaint. Police quickly cleared him of any charges.

There has been plenty of commentary around Walker’s on-field demeanour in recent weeks, with observers noting he has looked frustrated at times during South Sydney’s patchy start to the season, but Souths coach Jason Demetriou said the entire team was frustrated and that Walker had already proved a capable captain in the past. 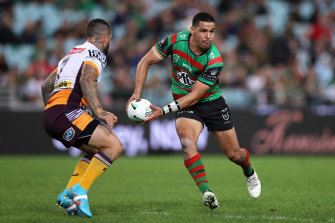 Cody Walker will captain South Sydney against the Warriors.Credit:Getty

“I trust him,” was Demetriou’s simple answer when asked by the Herald about the captaincy. “He’s done it before, he’s done it well, and I’ve got no doubts he will do it well again.

“We’re all frustrated at the moment. We all need to calm down a bit, go through our processes, and we’ll be sweet. Is Cody frustrated? He is, and that’s because he wears his heart on his sleeve and wants to get results. He’ll be right.”

As for the loss of inspirational lock forward Murray, Demetriou said: “He’ll be out for three or four weeks. It had nothing do with the Karl Lawton incident.

“It’s just a clean-out required after his surgery [over the summer]. It had been annoying him a bit, so we decided to get it fixed rather than push it. 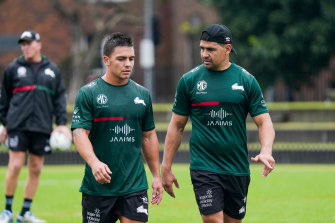 “We’ll miss the work he does through the middle third, he’s a link to our halves and tireless in defence, but we’re confident we’ll adjust and cope with it.

“We would have needed to cope without him through the Origin period, so I suppose it’s come a bit earlier for us. I don’t know about Origin I, but he’ll be right after that. Having Jacob Host back allows us to move Jai Arrow there [to lock forward], and he’s a pretty handy replacement to have.”

Kodi Nikorima plays his first game for Souths in the No. 14 jersey against the Warriors club he just left.

Meanwhile, Ryan Papenhuyzen will be out for up to six weeks after scans confirmed he suffered a hamstring tear and PCL injury to his knee in Melbourne’s defeat of St George Illawarra on Sunday.

Storm teammate Reimis Smith is also facing up to three months on the sidelines with a ruptured pectoral.

Papenhuyzen’s sublime start to 2022 mirrored a similar run of form 12 months ago before a heavy concussion suffered in last year’s Magic Round ruled him out of NSW contention.

Mitch Barnett returns for Newcastle after serving a six-week suspension for his late shot on Penrith’s Chris smith, and will be joined by Adam Clune (knee), but Tyson Frizell and Dane Gagai (cheekbone) will not feature in Friday’s clash against Canterbury.

Payne Haas and Kurt Capewell return for the Broncos in their Friday night showdown with Manly who welcome back Haumole Olakau’atu.

And Nicho Hynes will start at fullback for Cronulla with Braydon Trindall joining Matt Moylan in the halves for Sunday’s game against Canberra.