Home » Rugby » ‘I want to be like that guy’: Luai reveals man-crush on Munster

Jarome Luai could be describing himself, but that’s the way the Penrith playmaker sums up the Storm star he will mark up against in Sunday's NRL grand final. 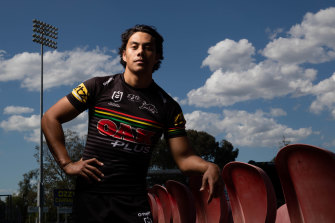 Luai, meanwhile, is delivering on the promise he displayed as a junior after a breakout year at the foot of the mountains.

The 23-year-old has long been a fan of Munster and wants to base his own free-wheeling game on the Melbourne No.6.

I want to be like that, I want to play what is in front of me. He’s got so much X-factor, he’s so dangerous.

“He’s a big frame and when he runs the ball, he runs to break the line.

“I want to be like that, I want to play what is in front of me. He’s got so much X-factor, he’s so dangerous. He will be a target for us to watch out for.”

The feeling is mutual. The pair hit it off after meeting at a nines tournament and Munster was quick to acknowledge Luai’s role in Penrith’s 17-game winning streak.

"He's got a lot of confidence, a lot of skill. I like the way he plays, he plays with a lot of flair and he's not too scared to get in with the rough stuff,” Munster said.

"He has come on leaps and bounds from previous years. There was obviously a question mark on who would play six for them and he has taken it with both hands.”

The Rabbitohs attempted to poach Luai the past two times he was off-contract and he will receive more interest from rival clubs when he becomes a free agent on November 1. However, the St Marys Saints junior has no intention of leaving the Panthers.

“Hopefully Penrith will re-sign me. We’ll see how I go,” he said.

“This is my home, my childhood dream has come true. I get to play in my backyard every day, train every day here, it’s about a 15-minute drive from home, it’s not too far. I’m going to be here for life.”

Luai is one of more than half-a-dozen local juniors who tasted premiership success with the Panthers at National Youth Competition level. The opportunity to replicate the feat at NRL level with his mates is still sinking in.

“It’s crazy and it makes it that much more special,” he said. “You’re willing to work harder for the end prize and we’re just 80 minutes away from what you work for your whole life. There are a lot of young boys in this team, so it’s come pretty quickly to us.

“People talk about us not having much finals experience but it feels like back when we were in under-20s, winning premierships there as well. It doesn’t feel any different, just the occasion is much bigger.”