Dragons forward Josh Kerr has made the stunning admission he would “die for rugby league”, as a rapid concussion assessment tool used during last year’s women’s State of Origin match looms as a key weapon in the fight to protect players.

Kerr, who was part of Queensland’s State of Origin squad last season, on Thursday said he was willing to risk his health to play in the NRL, only days after his former teammate James Graham said he “privileged the present over the future” during his playing days. 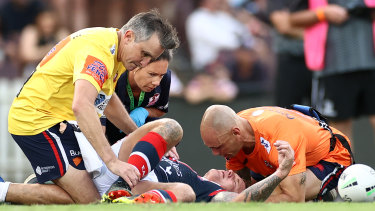 “People that are worried about [the long-term effects of concussion] don’t play the sport,” Kerr told reporters.

“I know it might sound silly and a bit naive saying this, but I’d die for rugby league because [of] the people you meet, the places you go, the money you get paid … you can’t do this forever. I think you’ve got to be willing to die to play this sport.”

His extraordinary comments come as the 10-second EyeGuide test shapes as the most significant piece of objective technology used on elite rugby league players, which for the first time have admitted they hide likely concussion and its symptoms from club doctors to stay on the field.

The eye-tracking technology’s inventors claim to have the ability to provide a brain wellness score by calculating results on a person tracking a dot on a screen or a moving object like a finger. 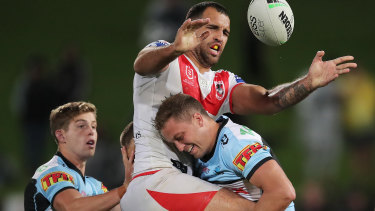 A baseline tracking pattern is then compared to the results of an athlete who has potentially suffered a concussion, like a boxer or rugby league player. A doctor can then use the analysis to help form a concussion diagnosis.

EyeGuide officials had begun discussing the product with the NRL before the COVID-enforced suspension of last year’s competition and have had regular dialogue with several high-profile clubs and some of rugby league’s top medicos.

It comes after a paper published in the British Journal of Sports Medicine said one in five NRL players admitted to lying about likely concussion and symptoms to team officials during the 2018 or 2019 season.

The study’s lead author, Dr Tom Longworth, said it highlighted the troubles doctors have diagnosing concussion in NRL-contracted players and the need for more objective testing.

‘I think you’ve got to be willing to die to play this sport.’

“If you’re playing sport or fell off your bike as a young kid, you can go to the doctor and they wave their finger in front of your eye to see how well your eyes are moving,” EyeGuide director Shane Keating said. “This is the modern day equivalent of that.

“Very simplistically by doing a 10-second eye test we get a good insight into what’s happening with the brain. We also use it to study fatigue at the moment.

“There’s two uses: the in-game scenario where they come to the sideline as well as during the recovery phase.

“At the moment in a competition like the NRL part of their protocols include a 10-minute test with some very subjective sort of questions. You can’t lie to this system. There’s a number of belts and braces to make sure you can’t fudge it.”

The EyeGuide technology was used by the Queensland women’s State of Origin team last year, while Queensland Rugby League officials have also shown an interest in pursuing the test for its elite competition.

But its most widespread use is set to take place across the Brisbane Rugby League in 2021 with the organisation poised to sign off on a plan for its use at all A-grade clubs.

“Their enthusiasm is very high,” Brisbane Rugby League director Michael Rose said. “As a sport and as a board of directors from Rugby League Brisbane we are being proactive with it and hopefully that attracts more people to the game.”

The long-term impacts of concussion have been fiercely debated in rugby league this week after Roosters co-captain Jake Friend suffered concussion in his side’s opening round thrashing of Manly. Friend’s immediate future in the game is in doubt after multiple concussions last year.

The concussion controversy prompted one of the game’s leading enforcers in the NRL era, former Bulldogs and Dragons prop James Graham, to claim “maybe for me the meaning of life was finding something worth dying for” in an emotional appearance on Fox League’s NRL 360.

One of the game’s highest-profile players, Australian and NSW captain Boyd Cordner, will miss at least 12 games this season after multiple concussions last year.

The NRL has introduced a 11-day stand-down period for any player diagnosed with concussion. They can only return within a shorter timeframe if they receive written clearance from a specialist concussion doctor.