Now might not be the ideal time to raise the subject, given the fragile state of trans-Tasman rugby relations, but there is one more favour Australia requires from New Zealand.

Little by little, the ANZAC spirit is re-asserting itself, what with New Zealand Rugby finally agreeing to stage Bledisloe III in Perth on Sunday – albeit without three senior All Black players, captain Sam Whitelock and first-choice halves pairing Aaron Smith and Richie Mo’unga.

It has meant, too, that the Rugby Championship will go ahead in Queensland in coming weeks, a veritable mini-World Cup. Indeed, a successful TRC played in front of crowds in this era of COVID-19 would demonstrate the benefits of Australia’s bid for the 2027 World Cup.

Yet perhaps the most significant longer-term outcome was that NZ Rugby came to terms with Rugby Australia over Super Rugby. The competition will recommence next year with a newish format but a slightly 1980s look – five NZ teams, five Australian teams, and newcomers Moana Pasifika and the Fiji Drua. Twelve teams, each playing 11 matches on a home and away basis.

There will be no South African sides, no Jaguares of Argentina, no Sunwolves of Japan. The bloated finals system will remain in place, however, which means the 12 sides will play an entire regular season just to eliminate the bottom four teams. Still, it is an understandable trade-off that officials opted for a one v eight, two v seven, three v six, four v five quarter-finals format, given a maximum of six home matches in the regular season is scarcely sustainable.

In the end, Australia has achieved basically its dream format, the one it used to fantasise about back in the days when its teams were being blown off the park by South African referees or ambushed in Buenos Aires. Jettison them all, we used to say, and let’s get back to how it was in the beginning, with the original South Pacific Championship. 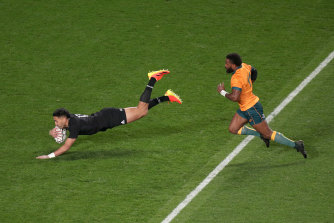 Let’s not get too romantic. In its original iteration, from 1986-1990, no Australian side won the SPC. The five titles were split between Canterbury (today’s Crusaders) and Auckland (today’s Blues). Australia entered only two sides, NSW and Queensland. Remember, too, this was during the period when Andrew Slack’s Wallabies defeated the All Blacks on their own soil in a three-Test series, in the process recording Australia’s most recent win at Eden Park.

When the tournament was reformatted as the Super Six in 1992, and later when the South African giants were added, along with Samoa (at the expense of Fiji) to form a Super 10 – the immediate precursor to professional Super Rugby as we know it – Queensland won the title three times in four years. This was arguably the greatest Queensland side of all time, with both the 1991 and 1999 World Cup triumphs having a distinctly maroon tinge.

Since then, there has been a marked drop-off in performance, from Queensland and Australia. Which brings me to that favour mentioned above.

Australia does not have the playing depth to support five professional franchises, especially against opponents as powerful as the Kiwis. New Zealand has been telling us that for years, with former All Blacks coach Steve Hansen adding his two cents just this month. The trouble is there is an appetite for five teams and, as the events of 2017 warned us, tampering with that number threatens to destroy Australian rugby. So what is the alternative?

Encouraging as club football remains – check out the two dramatic Brisbane semi-finals on Stan – it seems to me the only solution is to ask NZ for its surplus talent. The Kiwis have quality players enough for seven or eight Super Rugby sides. Just look at the standard of their ITM Cup. But most of those players are banging their heads against a brick wall trying to crack a contract with the Highlanders or Chiefs, let alone the Crusaders.

In the “one for each other and all for ourselves” spirit still animating rugby on both sides of the ditch, NZ will surely ask what is in it for them? Why offer Australia 20 or so of their best young players? Well, for starters, those players would get experience at Super Rugby level they would otherwise have been denied. And because they would be testing themselves in the same competition as everyone else, the All Blacks selectors would be free to select any of them. It would widen and strengthen NZ rugby.

Yes, there is the possibility some players might return home but, really, that would still be as much to NZ’s advantage as to Australia’s. It would make for a more competitive, and hence more commercially viable, Super Rugby series.

Consider the contribution former All Blacks Jeremy Thrush and Richard Kahui have made to the Western Force. Now multiply that 10-fold.