Canterbury legend Geoff Robinson is taking on his latest battle, with throat and mouth cancer, in much the same way he did opponents during his playing heyday in the 1980s.

“I will work as hard as I can to fight, I promise you that,” he said.

Robinson was one of the game’s cult heroes, an unmistakable presence on the footy field with his beard and flowing dark locks. Even now, at the age of 63, people still stop him in the street to talk about the way he decimated Peter Sterling and Jack Gibson’s “Parramatta wall” or his infamous fight with Royce Ayliffe or any of the other numerous highlights during his premiership-winning career.

“They do like reminiscing about it,” he said. “They still bring it up and show it on the TV every now or then.

“I just ran through and hit a bloke, that’s all I did. I still get cold shivers when someone comes up to talk about it. I think how good this is?

“Those memories will never go away even though it’s been so long. That was 1986, my last game. I’ve been retired for a while. It’s gone too quick.”

Those interactions, as well as countless phone calls from former players checking on his health, have come as a welcome distraction from Robinson’s current plight. The former firebrand is now into his fourth week of chemotherapy, a treatment that is interspersed with blasts of radiation. It requires daily trips to Liverpool Hospital in a bid to fight off the cancer. 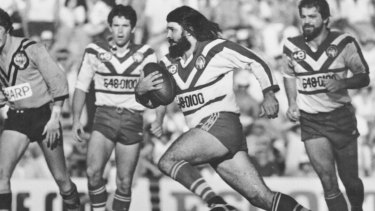 Bulldogs cult hero Geoff Robinson charges at the Balmain defence in the 1980s.

“With the radiation, they try to shrink it in case they have to operate because, in the current situation, it’s too dangerous,” he said.

“They do the radiation 20 to 30 minutes each day and chemo goes for four hours a day.

“They’re a bit concerned with that, but there’s this tube they tie to your stomach and you can feed yourself through there and get nutrition.

“I must say the doctors at Liverpool Hospital are marvellous. The nurses and everyone here have got to put up with a lot of stuff, especially with COVID, but they do a wonderful job.

“I can’t speak highly enough of them. They deserve to be paid more money, especially dealing with cranky bastards like me.” 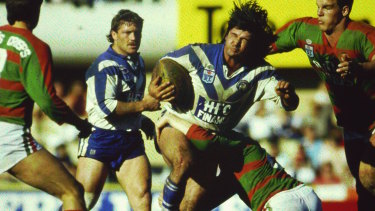 Ever since the diagnosis, Robinson has been inundated with calls from former players keen to lift his spirits. Bulldogs sponsor Arthur Laundy checks in on him daily and the likes of Steve Roach, Terry Lamb, Mark Carroll, Ben Elias, Joe Thomas – “the list goes on and on” – have brightened his day with phone calls of support.

“It keeps me going, people like that ringing me,” he said. “People talk to you, they tell you to fight. They bring up things from the past; if you won that, you can win this.

“I’m just lost for words sometimes; I don’t know what to say to people. Sometimes you get a bit down and then you get a phone call and that picks you up.

“It’s such a great era because we are still mates after all this time. I can’t thank them enough. It helps me to keep on fighting. Having so many people ring me up only makes me fight harder and harder.

“I couldn’t have a better family. I’ve got seven kids and 17 grandchildren. They have been incredible. I’m lucky to have such a great family.

“This is the biggest [challenge of my life]. One of my sons rang me this morning and said, ‘Dad, look, you’re one of the toughest blokes I’ve ever seen. This is the toughest thing you’ve been through and you will win’.

“They gee me up and keep me going, my sons and daughters and wife. My wife is unbelievable to put up with me for 45 years.”

For a hard man from a hard era, prior to his cancer diagnosis, Robinson was in good physical shape.

“I haven’t had any real problems, just a bit of soreness and arthritis, but that comes with age anyway,” he said.

“I think I’ve done pretty good to get this far.”