Home » Rugby » In 250th Storm game, Bromwich takes on coach who unearthed him

Club legend is that Bromwich was completely off the NRL radar and was visiting his brother Kenny, who was a junior Storm player. 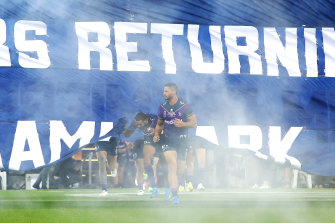 Jesse Bromwich leads the Storm onto the field in round one.Credit:Getty Images

Jesse, who had been playing in Orange in country New South Wales, was watching training when Arthur saw him on the sideline and asked if he wanted to join in before being so impressed he gave Bromwich a game in the team’s under-20 side that weekend.

On Thursday night, Bromwich will captain the Storm and play his 250th game and he will do so with Arthur, now Parramatta Eels coach, leading the opposition.

Bellamy laughed about the turn of events when he was reminded about it on Wednesday.

“Kenny was here and I think Jesse came down from Orange for the weekend and was watching Kenny train,” Bellamy said.

“Brad saw him on the sideline, I don’t know if he just picked him out or if he was short of guys for training, but he has done us a huge favour so thanks Brad.”

Bromwich needed pushing by his coaches and leaders such as Cameron Smith and Billy Slater to become more of a leader. But he has emerged as an example setter for the club’s forward pack and, along with lock Dale Finucane, has taken over from Smith to be a co-captain for 2021.

Bellamy has also been impressed with how Bromwich has taken the captaincy in his stride and continued to perform.

“I like what I saw from Jesse in our pre-season,” Bellamy said. “I think he’s stepped it up a little more and he’s only the sixth guy from our club to play 250 so that’s a big honour in itself.

“To play 250 is a wonderful achievement and with the way he has played, it just goes to show the professional that he is.”

Bromwich is more focused on taking on the powerful Eels pack on Thursday night but he admits he is proud to join Smith, Slater, Cooper Cronk, Ryan Hoffman and Matt Geyer in playing 250 Storm games.

“It hasn’t really hit me yet but my family has been reminding me. I have got three sons and the two of them are old enough now to realise what is going on and they are pretty stoked about it,” Bromwich said.

“They want to come up to Sydney for the game. I’m just really grateful to Craig and Frank for just giving me the opportunity to play here and all the success that has come with it. It’s just a number but I’m just grateful for it.”

The Bromwich family will stay in Melbourne this week due to it being a school night.

Bromwich has passed one early test as a captain during Thursday night’s season-opening 26-18 win over South Sydney when he chose not to use his captain’s challenge on a knock-on against his brother Kenny in the first half but correctly challenge in the 70th minute when the Storm were incorrectly found to have knocked on.

“I knew not to do that,” Bromwich joked about why he didn’t challenge his brother’s penalty.

“He was pretty certain [teammate Justin Olam] but it [captain’s challenge] was the last thing I thought of when it came to this captaincy stuff. But he was pretty certain and I thought if we got it right then it would have a big impact on whether we win the game or not. I’m happy that worked out.”