Western Bulldogs hard nut Josh Dunkley says three of his injured teammates “really look good” and are set to be in the selection hunt for the grand final, and he hopes to help deliver great mate Adam Treloar a premiership.

As the focus sharpens heading into Saturday week’s decider, the Bulldogs are monitoring Laitham Vandermeer (hamstring) who was hurt against Port Adelaide on Saturday, while key defender Alex Keath (hamstring) was forced to sit out what proved to be the Bulldogs’ biggest win in finals history. Ruckman Stefan Martin rolled an ankle on Saturday but trained fully on Tuesday. 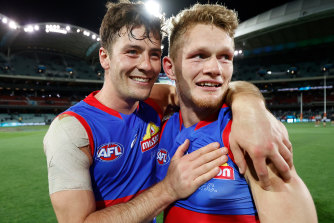 The fortnight’s break leading into the showpiece event at Perth’s Optus Stadium has also given Marcus Bontempelli time to rest his knee, while livewire forward Cody Weightman has had more opportunity to recover from concussion, having been hurt in the semi-final in Brisbane.

“They are going really well. I think both Cody and ‘Keathy’ are on track and Laitham as well, who had some hamstring tightness on the weekend. Those three boys are really looking good at the moment,” Dunkley said on Tuesday.

There will be a selection squeeze come Thursday week, for Keath and Weightman are all but automatic selections when fit. This could mean premiership player Zaine Cordy, who replaced Keath last weekend and did a good job on Todd Marshall, becomes a hard-luck story.

Dunkley knows all about the frustration of injury, having missed three months because of shoulder surgery before returning against the Gold Coast in round 18, only then to be forced into 14-day home quarantine having visited a local cafe that was deemed a tier-one exposure site.

That meant he missed the top-of-the-table clash against Melbourne, the Bulldogs rebounding from a 28-point loss when the teams met in round 11 (Dunkley also missed that clash) to claim a 20-point win, with Bontempelli, Jack Macrae and Caleb Daniel in fine touch. But Dunkley now gets his chance against the Demons, completing a remarkable turnaround when, this time last year, frustrated by a lack of midfield time, he was preparing a trade request to head to Essendon.

A deal could not be done; the Dogs wanted two first-round selections and the Bombers offered only one. He returned to the Whitten Oval and recommitted to his teammates.

“I haven’t thought about it too much, even since it didn’t happen,” Dunkley said.

“I have just looked forward … to be able to come back into the group and be embraced by everyone and from day one of pre-season, I think it has been really important.”

Dunkley has struck up a great friendship with Treloar, the former Magpie who joined the Bulldogs in a tumultuous trade period last year, and the pair has helped each other through a testing campaign.

Treloar was part of the Magpies’ losing 2018 grand final, and Dunkley, having tasted the ultimate success with the Bulldogs in his 2016 rookie year, wants Treloar to climb football’s Everest.

“It would be unbelievable, I just get goosebumps thinking about it, to be honest,” Dunkley, off contract next season, said.

“The feeling of winning one is incredible. It’s hard not to think about it but, as I said before, we have to approach the week like it’s our last. It is our last, but we just got to put our heads down and work really hard, the job is not done yet.”

Treloar has opened up about the challenges he faced last week when publicly criticised by former players for his lack of output against the Lions in Brisbane (10 disposals), at a time he said life on the road away from his wife and daughter was becoming harder to handle.

“He is a very mature player and he has been in this situation before. He really put his head down … he said to me post-game [in Brisbane] that he was going to put his head down and work really hard to get back to where he wants to be. He did do that – the proof is in the pudding,” Dunkley said.

Treloar, on a wing, responded with 23 disposals and a goal against the Power.