St George Illawarra have submitted a formal application to the NRL in the hope of signing Israel Folau on a two-year deal.

The Herald can reveal the Dragons have formally approached the NRL about acquiring Folau's services from this season to play in the centres, with the governing body set to consider allowing the dual international to return to the sport. 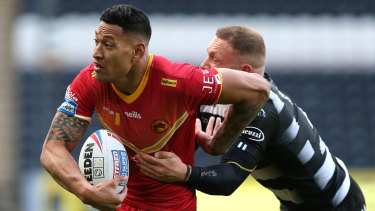 ARLC chairman Peter V'landys previously indicated the door was all but shut on Folau to return to the sport after the controversy surrounding his religious beliefs during his time in rugby union.

However the NRL has recently indicated to the Dragons that it will consider the application and will not make a decision until they have reviewed the proposal and spoken to the relevant parties.

The Dragons board has approved the approach, while the club has also informed its major sponsors of its intention to sign Folau. St George Illawarra chief executive Ryan Webb confirmed the club was in the process of luring the former Queensland and Australian representative to the Dragons.

“We are always on the lookout for great players,” Webb told the Herald. “We have enquired with the NRL about Israel and we will work with them to hopefully see him join us in 2021. 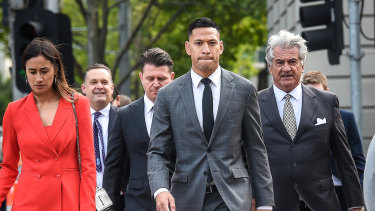 Israel Folau arrives at the Federal Court in Melbourne in 2019.Credit:Justin McManus

"We understand there will be a range of opinions in regards to this decision, but we believe he would be a good addition to our club."

Folau was meant to play for Catalans in the Super League this year, but returned home over the summer after the birth of his first child.

When V'landys was appointed as chair of the commission, he was asked about the prospect of allowing Folau back into the sport.

"The game is inclusive. Israel's comments are not inclusive," V'landys said at the time. "When I was a kid and kids used to get bashed up because they were different, I used to go and defend them. And a lot of them, it's because their role models or their peers made them that way. 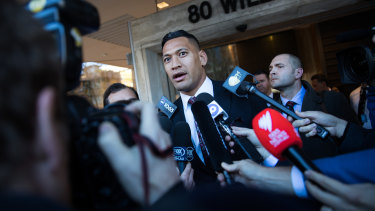 "I have no tolerance for people that put other people's lives [at risk] or [commit] violence. It's a big statement to make. With due respect to Israel, what he says, young kids listen to. He is a role model. They act on it. And when you're a kid at school and you get bashed up because you're different, I don't think that's a good thing."