Home » Rugby » ‘It shows the discontent people are feeling’: Magpies petition to spill board attracts thousands of signatures

A petition led by 40-year member David Hatley to spill the Collingwood board has attracted nearly twice as many signatures than required.

More than 1200 Collingwood members have signed the petition to force an extraordinary general meeting, and force the Magpies’ board members to vacate their positions until a fresh election takes place. 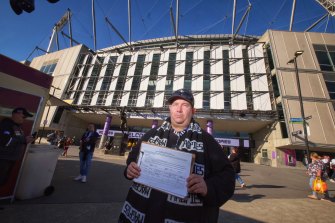 Collingwood member David Hatley has attracted more than 1200 signatures for his petition to spill the Magpies board.Credit:Luis Ascui

Hatley thanked the Magpie army for their “overwhelming response … to end the disconnect between the members of our football club and the board”.

“Why we’re extending it is because some of the people that might have signed yesterday might not be eligible voters – some of them might be normal season ticket holders – but 600 plus what we’ve got online, that’s more than enough already.

“On Saturday [at Collingwood’s home game against Geelong] we’ll do the paper [petition] again and we’ll leave the online open ’til Saturday night as well. Then we’ll have a look at our numbers and we’ll get together as a group and decide what we want to do.”

Hatley said he was surprised with how quickly he filled the 650-signature quota.

“We were hopeful. We thought we might have got 300 or 400 yesterday, but it probably just shows the discontent that people are feeling,” he said.

But Collingwood champion Tony Shaw, a former captain and coach of the club, said he wasn’t in favour of the potential coup.

“I don’t agree with it,” Shaw said on 3AW’s pre-game show on Sunday.

But Hatley said for every member against the spill, there’s another member in favour.

“If Shawry doesn’t agree with it that’s fine,” he said.

“We’re talking about democracy. If you don’t want to sign it, I’m not forcing you. Everyone is entitled to an opinion. 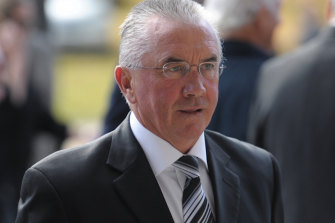 “Peter Moore has an alternate view; he wants it. He was on SEN on Friday, he’s pushing for it, so that’s the alternative view. You’ve got Tony Shaw saying no and Peter Moore saying yes.”

“Clearly he’s a fantastic leader, he’d have a great vision for the club,” he said.

“What it’s lacking at the moment we just don’t have clear leadership. There’s a vacuum after Eddie [McGuire]. The existing board is a continuation of what Eddie had to offer, but it’s a continuation without Eddie.

“There’s an argument to say that it’s more of the same and perhaps it’s time to consider something different. They really want to hang on it seems, so that’s a real shame.”

But Collingwood chief executive Mark Anderson echoed the sentiments of president Mark Korda on pre-game radio on Sunday, saying a board spill was not the answer.

“I think it’s not the way to operate football clubs. Our members rightfully and should have a strong voice at AGMs, and they had that voice in February.

“EGMs, SGMs, they’re a massive distraction and we should be focusing on what we’re here for today [on the field].”