Home » Rugby » ‘It won’t change the way I play’: Swinton defiant after red card on debut

After one of the wildest Wallabies debuts in recent memory, where he became the first Australian player to be shown a red card on debut, Lachie Swinton has declared he won’t change the way he plays, but conceded his tackle technique might need a bit of work.

Ahead of the final Bledisloe Cup match in Brisbane last weekend, coach Dave Rennie pulled a surprise by naming Swinton in the No.6 jumper. 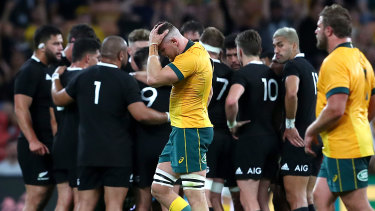 Lachie Swinton is sent off against the All Blacks last weekend.Credit:Getty

Despite a subtle protest from Michael Hooper to referee Nic Berry, Swinton trudged off Suncorp Stadium with the scores locked 8-8 and a million thoughts running through his mind. David Codey, Drew Mitchell, Tevita Kuridrani and Sekope Kepu are the only other Wallabys who have been handed a red card.

“Everything goes pretty quick,” Swinton said. “I saw it on the big screen and I knew I could be in trouble judged off the previous call on Ofa [Tu'ungafasi]. I didn’t know what was going to happen but rolled with it.

“It was tough and is tough for anyone having to watch your boys go to work without you. Full credit to the lads, they were chucked a curveball and adapted. By the end I was just stoked to be watching a great performance from my boys.” 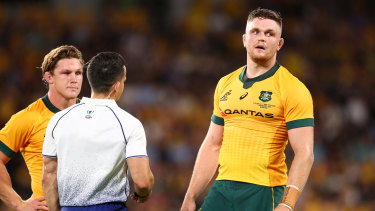 Swinton gets his marching orders.Credit:Getty

Australia ended up claiming a famous 24-22 win and despite missing out on most of the action, Swinton said he regretted little and wouldn’t change the way he played.

He said the four-week ban, which was reduced from an entry point of six weeks, was fair and that he would work hard to change his tackling technique.

“It definitely won’t change the way I play,” Swinton said. “The only thing that will change is me going back and learning from it and working on my tackle technique. The reason why I’ve been able to do what I have in my career is because of the way I play, so I won’t change my intent around the park.

“Considering all the mitigating factors, it was the right decision in the end.”

Swinton said he agreed with Dave Rennie’s view that World Rugby could consider a replacement player after 20 minutes if someone is red carded in order to ensure the contest remains fair.

“I like the sound of that,” Swinton said. “Sometimes people can be like, 'Oh, they had 14 men on the field, that’s why they won'. We obviously want the contest to be as fair as possible.”

The 23-year-old certainly showed he belonged at Test level and won’t get another chance until next July when Australia face France, but is thankful to have got his first taste of international rugby.

“It’s been such an unreal experience and I definitely want more,” Swinton said. “I’m just rolling with the punches. My focus is now on the team and trying to prepare them as best as possible and furthering my development. I’ve just got to move on."