The MCG will host a triumphant return for Melbourne’s premiership heroes and the Demons’ feted new cup. The only question is when this will take place.

Having ended their 57-year premiership drought in circumstances which club great Garry Lyon last week said were “tragic” – consigned to a grand final in Perth because of Victoria’s lockdown – Dees fans are clamouring for a return to their spiritual home to celebrate their champions and silverware. 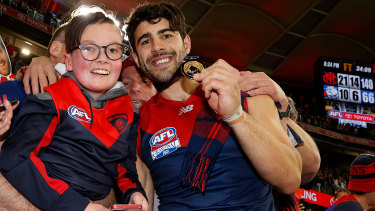 The Melbourne Cricket Club confirmed on Sunday that it was keen to host a reception for the Demons when restrictions allow.

The road map to normality unveiled by the Victorian state government last weekend offered promise for the notion of a celebration before the year is out.

However, Demons players will soon go on leave and not return until December, by which time the MCG will be gearing up for the Boxing Day Test and other cricket, all things going to plan.

At the very least, the AFL is poised to give Melbourne an early-season blockbuster at the ‘G, at which the Dees’ grand new flag can be unfurled as per tradition.

The legions of Demons supporters back in Victoria were at the forefront of captain Max Gawn’s mind when the star ruckman headed to the dais to accept the premiership cup on Saturday night.

“Everyone we left back home, families, friends. Everyone in the eastern states who supports the Melbourne Football Club – this is for you,” he said.

“It was a great win by the Melbourne Football Club last night … but on the point that they’re long-suffering, we’re all long-suffering,” Andrews said.

“So let’s not any of us do anything that makes this pandemic event longer, makes this lockdown longer.

“There’ll be a time to celebrate.”

Demons chief Gary Pert wrote to members in the lead-up to the grand final, committing to a season celebration with fans in Victoria when possible.

“For our Victorian supporters, please know that we are working hard behind the scenes to create opportunities for us to celebrate the 2021 season in-person, as soon as restrictions back home allow. We are working with the MCC on a function at the MCG, where we can come together and thank you for your support this year. Obviously, this will be dependant on restrictions but as soon as we can have a crowd, even if limited, we will ensure we can all come together,” Pert wrote.

“We are acutely aware of the challenges many people are facing in these difficult times. Right from the start of the year we have been conscious that the best thing we could do for our supporters right around the country was to consistently play an aggressive brand of footy that would put us back in finals contention.”