The top-selling item of Wallabies merchandise will not feature the Aboriginal flag after Rugby Australia baulked at paying a "seven-figure" sum in copyright fees.

The 2020 Wallabies First Nations jersey hit stores this month and is expected to once again fly off the racks, with the Australian Test team tipped to wear the jersey in a home Bledisloe Cup Test in October.

But in ongoing fallout from the Indigenous flag licensing controversy, which has hit all sports, the hugely popular Wallabies jersey and all other Australian representative and Indigenous team jerseys will not feature the Aboriginal flag.

Rugby Australia also confirmed the flag would not be displayed on field at the Test, as it was in Brisbane in 2017, even though physical flags can be bought as licensed products. The AFL made a similar call for their Indigenous round, two weeks ago.

"WAM clothing were demanding 20 per cent of the sales for the use of images of the flags," Lloyd McDermott Rugby president Dean Duncan told the Herald.

"The Wallabies Indigenous jersey is rugby's highest-selling product, we sell out and it's a limited edition, so the cost to Rugby Australia was going to be at least in the seven figures. 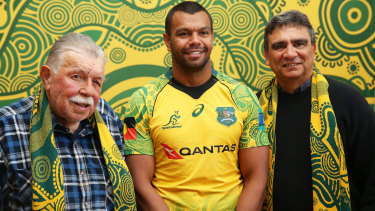 Kurtley Beale, centre, with the late Lloyd McDermott (left) and Gary Ella (right), at the launch of the first Wallabies Indigenous jersey in 2017.

"The biggest disappointment is not being able to identify under an image that is synonymous with our people.

"Having that flag on a jersey is essentially the same as having the Australian crest on the chest of the Wallabies jersey. If you take away that crest – or in this case our flag – it takes away an emotional link to a team that people have." 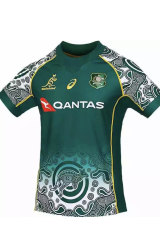 An image of the flag was displayed on the right-hand sleeve of the Wallabies Indigenous jersey in 2017 and 2018, when Australia wore it against England at Twickenham on the spring tour.

RA made the decision to stop using the flag's image in concert with the other major football codes in May last year, a move Duncan said was the right call and had the support of rugby's Indigenous communities. Indigenous Wallaby Kurtley Beale, Test captain Michael Hooper and Duncan were all consulted on the decision.

The Wallabies wore a variation of the Dennis Golding-designed print as their alternate strip at the Rugby World Cup in October, minus the Aboriginal flag.

But the move hit home for Duncan when Australia sent National Indigenous Schools sides to New Zealand in December for the World School Sevens Rugby tournament and the teams couldn't play under the Aboriginal flag.

Likewise, when more than 400 Indigenous primary and secondary school students swamped the Ella 7s tournament in Dubbo in March, no team could wear the flag on their jerseys. 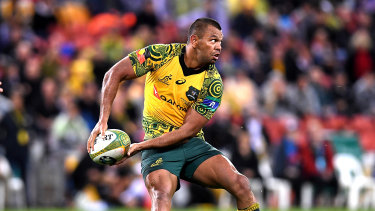 Kurtley Beale passes the ball during the Bledisloe Cup match between the Wallabies and the All Blacks at Suncorp Stadium in 2017. Credit:Getty Images

"How do you explain that to young kids, who take pride in who they are and are proud to have made that level at a national tournament," Duncan said.

"They wanted to know why they couldn't use it. We didn't want to politicise it, all we could say was, 'at the moment we're not allowed to use the image'.

The Brumbies and Reds will both wear their Indigenous jerseys at Suncorp Stadium for this weekend's Super Saturday clash – the first time two Australian sides will play each other in First Nations jerseys. Duncan confirmed there would be no display of the Aboriginal flag.

"The disappointing thing is that in 2017 it united absolutely everyone. There were so many positive comments that this should be worn for the Bledisloe Cup each time and that design sold out. You know a jersey is well-accepted when you start getting knock-offs from China, and that's what happened," he said.

"It was a flag that was designed and promoted to pull everyone together and it's so divisive now."