Isaah Yeo is the old soul of the youthful Panthers squad.

Yeo is just 26 but already a father-like figure for most of his teammates, who love their boomboxes, Instagram stories and funky haircuts.

Yeo’s musical tastes aren’t those of his teammates. The co-captain nominated Cat Stevens song Peace Train to be played whenever he scored a try at BlueBet Stadium. It was released 23 years before he was born. He hates nightclubs, loves reading and is often known as “the box-ticker” because of his obsession to work through a check-list of things to do each week at training and on game day.

Yeo is even ridiculed for somehow looking older than his father, Justin.

Justin is only 45 and was in high school at Parramatta when he found out his sweetheart back home in Dubbo, Amy, had fallen pregnant. 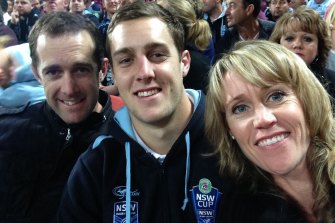 Old soul … Isaah Yeo with his parents Justin and Amy back in 2014.

Amy had to skip biology and geography HSC exams so she could have Isaah. The couple like to refer to Isaah as a “nice surprise”.

Justin also loves the nice surprise whenever someone asks him if Isaah is his brother.

“I love telling him I look younger. [My hair] didn’t start receding until I was 35, he started receding when he was 25,” Justin says.

Isaah can always fire back that his first-grade career lasted a little longer than his father’s, whose record included one game for North Sydney and 10 for Balmain.

“Both clubs folded not longer I played for them. Clearly I left my mark,” Justin quipped. 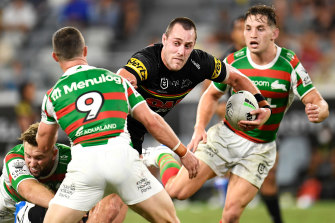 Isaah Yeo has been remarkable again for the Panthers all year.Credit:Getty

Isaah has 171 NRL games to his name so far. That’s the most of any of the current Panthers squad. So when the pressure starts to mount in the middle of Suncorp Stadium on Saturday afternoon against Melbourne, Yeo will be the leader who calms things down for Penrith.

The Storm have no such shortage of senior figures, even in their first year without Cameron Smith. Such is Yeo’s importance against the Storm that NSW Origin coach and Penrith legend Brad Fittler went as far to say his performance could prove the difference between them holding Mad Monday a week early or advancing to another grand final.

“I have these plants called salvias, which I actually call my Isaahs,” Fittler said. “They are like a beautiful reliable machine, they just keep giving and are awesome.

“Isaah just keeps going. You know if you ask him to do something he will do it. He’s just a really reliable bloke.

“He takes a lot of pressure off Nathan [Cleary]. He organises all the middle. Nathan will call the plays, and Isaah will organise everyone, he gets everyone into position, and that allows Nathan to be a runner and not an organiser.

“He’s got speed to get through the line. And if they take their eyes off him, he’s got a good show-and-go.

“Sometimes Isaah goes through stages where he might pass too much. But if he gets it all right this week, he could be the difference.”

Isaah Yeo as a four-year-old playing for North Ryde along side his sister Ariah.

Amy and Justin will be tuning into the game from their 25-acre property in Mudgee, in the state’s central west. They remain in lockdown. One of the last games they attended was round two this year when they surprised Isaah with a jersey presentation for his 150th NRL game.

Acheiving that milestone was always on the cards. Growing up, Isaah was head strong but never one to cause much trouble.

He ditched parties in the latter years of high school to focus on footy. When a Year 10 teacher asked Yeo what he wanted to do with his life, he said “play first-grade rugby league”. When asked about a plan B, Yeo said: “There isn’t one”.

Which isn’t to say he doesn’t give thought to deeper things in life. Yeo attended a Catholic school, does not regularly attend church, but makes a point of looking to the heavens before every game to acknowledge three people who all left a mark on his life for different reasons.

The first was his uncle Gerard who was one of the six Coogee Dolphins players killed in the Bali bombing attacks nearly 20 years ago. The second was his great-grandmother, Zita, who lived into her nineties. Added to that pair in May this year was his uncle, Mick Wilson, one of the original players for Cronulla who died after suffering a heart attack while working out on an exercise bike at home.

The eldest of four kids, Isaah is tight with his family, and will speak with his mother a couple of times a day. Isaah and Justin are even closer, regularly talking football and game plans. 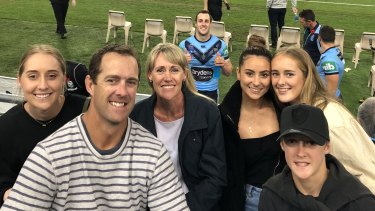 Isaah rarely produces highlights reel plays, but Justin appreciates what his son does on the field. As do his Panthers temmates.

“He’s quite intelligent about his football and understands his game,” Justin said of Isaah. “He was a centre and five-eighth early on. He was relatively tall and quick. When he moved to Sydney he became a second-rower who could play centre, then a lock who could play back row.”

Last year’s preliminary final against the Rabbitohs remains one that sticks in Justin’s memory. He still remembers Isaah pushing off South Sydney’s Damien Cook and then sending Dylan Edwards into space for a try what booked the Panthers a spot in the decider.

Isaah meticulous approach will mean he’ll be ready for anything come kick-off on Saturday. League players have a reputation for off-field problems getting in the way on the field. So such doubts surround Yeo.

Garth Brennan was the coach of the Penrith under-20s side that won the title in 2013. Yeo is the only player in that side still at the club.

Brennan loved referring to Yeo as “the Mr Sheen of the Panthers”.

“There isn’t much dirt on ‘Yeoy’,” Brennan said. “He’s also turned into a fantastic leader. I wouldn’t have predicted that when I first met him. He was a little introverted, and he probably still is, but when he talks the players listen. He talks sense.

“He’s always been that player you didn’t have to worry about, on the field or off it. He’s not the biggest, fastest or strongest, but when you went to war he was the guy you needed in your football team and someone you could rely on.”