An emotional Nathan Jones has described in detail the despair he endured at being left out of Melbourne’s grand final side for 2021 and how he found meaning and fulfilment after struggling to deal with the “utter devastation” of his omission and the end of a 302-game career without a flag.

“No one would know of my struggle post grand final, I really struggled mentally, I closed myself off from all of those around me, in some way feeling helpless,” said Jones, a former Melbourne captain, in a raw and stirring Norm Smith oration for the MCC, attended by the Demons’ hierarchy and other luminaries.

“For I knew this was it, everything I’d attached my view of success to was now never going to be achieved, I couldn’t reach the peak and how could I ever be fulfilled after all of that”, Jones said of the period after Melbourne’s premiership, when he had retired.

“I continued to train as way to take my mind off it, often running and trying to think it all through, compartmentalising it all in my own mind.” 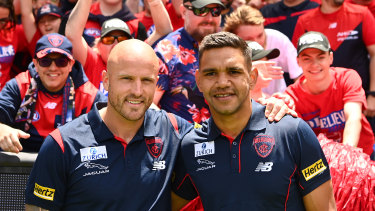 Nathan Jones and Neville Jetta celebrate with the Demons faithful at the MCG last December.Credit:Getty Images

In a speech that prompted a standing ovation, Jones told the story of his career, of the embarrassment he felt during the Demons’ worst days, and how he dealt with missing his dream of “holding that treasured holy grail aloft, accepting my medallion … that’s how the story was supposed to go”.

Jones, who did not play finals from his first season at Melbourne in 2006 until 2018 and fell out of the side for most of 2021, explained that he came to terms with missing the premiership by learning that his great career achievement had been his impact on other people, rather than individual or team success.

He credited his wife Jerri and his friend and mentor, the 1988 Brownlow medallist and media commentator Gerard Healy, with giving him the right perspective on life post-grand final – Jerri having given birth to twins the Sunday before Melbourne steamrolled the Bulldogs to win their first flag in 57 years, Jones having decided to leave Perth the day after the preliminary final, barely in time for the births – “that decision’s one I will never regret”.

“So many people I didn’t know would share with me their appreciation for what my career meant to them and what I had achieved. Initially, I didn’t understand it,” Jones said.

“I’d finally come full circle, accepting my journey as my story, it wasn’t to be the premiership medallion or premiership cup, or a list of accolades a mile long, my greatest achievement was the impact I had on people. My higher purpose was inspiring with determination, grit and resilience.

“That’s where I’ve found fulfilment and it overwhelms me with emotion when I think about it.” 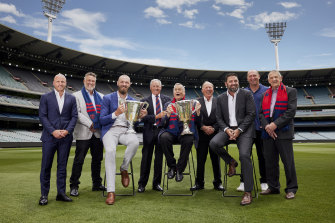 Jones, who spoke following an accomplished speech by Fox Footy’s Sarah Jones about her pioneering journey in AFL broadcasting, told how the club’s struggles had impacted on him personally during the early period of last decade, prior to the arrival of then chief executive Peter Jackson and coach Paul Roos, who handed over to premiership coach Simon Goodwin.

“I took all our losses to heart and carried the burden of how poor we were as a club. I took it personally and it had a great effect on me …

“I had some personal success come my way in this period, but it never really filled the void, I’d often discount its value and felt they always lacked any connection because the club itself had no respect and the seasons were so desperately poor and soulless.

“As players you can only take so much negativity and I really struggled at times with my own self-doubt. A regretful trait of linking my own self-worth to achievement, accolades, and recognition was what I struggled with the most.

“This was born out of the want to be admired and respected both personally and as a club. I’ll never forget those periods of utter embarrassment, ashamed to even get out of my car to pick up a post-game meal, avoiding catching up with friends for fear of what people would say or think, embarrassed to even be with my own close-knit crew of people.

“It was like they felt sorry for you, and that sentiment made me feel ill.”

Jones revealed that he had “walked an emotional tight rope for the entire season” in 2021.

“I would consciously conceal my emotions publicly for my responsibility was to my team no matter my personal situation. Privately the pain was unrivalled, tearing me up inside to breaking point. I couldn’t have done anymore to put my case forward; I take comfort knowing this.”