The goalkicking forward has returned to football with Western Bulldogs forward Josh Bruce becoming the first player at the club to kick 10 goals in a game since Simon Beasley against Brisbane in 1987, as they handed out a record-breaking 128-point thrashing to a hapless Kangaroos.

It was the Bulldogs’ highest score and biggest winning margin against North Melbourne with 25.17 (167) eclipsing their previous record of 164 points set in round three, 1984, and the margin of 128 was the club’s greatest against any team, beating their 120-point defeat of Melbourne in 1985. 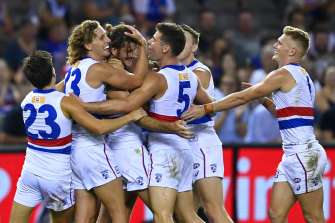 Josh Bruce is congratulated by teammates during his goal feast.Credit:Getty Images

It was hard to watch as the Bulldogs kicked 12 unanswered goals from the moment North Melbourne forward Nick Larkey missed a set shot midway through the second quarter from directly in front that would have put them within a goal.

All North Melbourne saw from that point on were tail lights fading into the distance.

The Bulldogs’ dominance came despite an early injury to defender Ryan Gardner, who was subbed out of the game within the first minute after hurting his AC-joint, his left arm immediately placed in a sling.

Without a key forward to worry them the Bulldogs hardly missed a beat, with premiership skipper Easton Wood slotting into defence to help Alex Keath out. 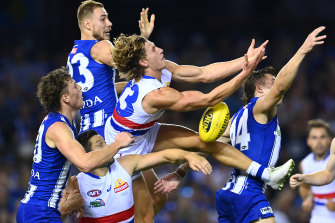 At the other end Bruce’s eyes were lighting up. He had Josh Walker for company but he didn’t pose any issues as he kicked four goals in the first half. With his confidence high he dominated all-comers, marking on the lead, in contests, or scrounging the ball from the ground.

Apart from his efforts, the biggest highlights were provided by Adam Treloar, who kicked back-to-back running goals – one directly from a centre clearance – late in the second quarter in his familiar, explosive style.

North Melbourne’s competitiveness is a concern, particularly with scoring made easier through the rule changes.

They will point to the debut of Will Phillips – who showed he could win a contest wearing the famous No.29 – as well as glimpses from Tom Powell and Charlie Lazarro in their first year, with Lazarro kicking a classy running goal to stop the Bulldogs’ goal streak.

None of the trio had a real impact but the experience is useful. 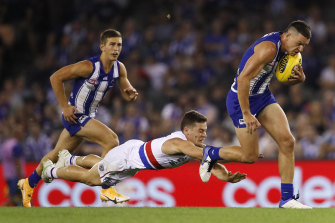 The Kangaroos’ Luke Davies-Uniacke on the run as Josh Dunkley dives to tackle.Credit:Getty Images

Losing Jared Polec to a hamstring injury in the second quarter didn’t help but even the Ever Given – the ship recently blocking the Suez Canal – would have struggled to slow the Bulldogs’ scoring with injuries to experienced defenders Robbie Tarrant and Aiden Corr impossible to cover.

Their back line is well below the standard needed to trouble attacks, with skipper Jack Ziebell the only player with the requisite class to contain an attack.