A Victorian schoolboy giant – likened to Max and Ben King – could be picked up in this this year’s mid-season draft, prompting frustration from interstate clubs.

Jumping Jacob Edwards, an athletic 202-centimetre ruck/forward, looms as the likely first pick in this year’s mid-season draft, after being overlooked in the national draft. 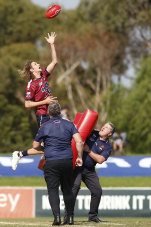 The 18-year-old, like many potential Victorian draftees, was unsighted in 2020 because of the impact of COVID-19, meaning he wasn’t picked up last December.

But the big man, who is a late developer after switching from basketball as a junior, has been turning heads in the NAB League while playing for Sandringham.

Because Edwards nominated for last year’s draft, he is eligible for this year’s mid-season equivalent.

It essentially means a club such as North Melbourne – who look likely to have the first selection – could get in early and take Edwards before he’s available in the national draft later in the year.

Edwards, who is still only 78 kilograms, will almost certainly not be ready for AFL football this year but could be allowed to develop at school level and in the NAB League while on an AFL list.

The 18-year-old has had some recruiters salivating with his rare ability to ruck with both his left and right hands and has been pushing forward and kicking goals.

Edwards has already been interviewed by Fremantle, Sydney and Hawthorn.

“He’s a bit like the King boys, Max and Ben,” Wheeler said.

The pending selection of Edwards would be vastly different from the last mid-season draft, which led to Marlion Pickett being selected by Richmond in 2019 and make his debut in a winning grand final.

Ryan Gardner (Western Bulldogs), Will Snelling (Essendon) and John Noble (Collingwood) are the players still on AFL lists from that mid-season draft in 2019.

Interstate clubs have also expressed their disappointment that it would not be feasible for them to select someone like Edwards, who is still completing his year 12 studies at Mentone Grammar.

“If they’re still at school, it’s simply not equal,” one interstate recruiter told The Age.

The selection of Edwards, however, would not be to fill a gap at AFL level this year but more to develop him over a long period of time.

Interstate clubs would argue it would be harder to develop a schoolboy while he’s still at school, given he would be flying to and from the club to train.

But the AFL has no problem with teenagers being selected.

“We want the best players across the country, whether they are 18 or 28, to be able to have the opportunity to reach the elite level,” an AFL spokesperson said.

“I think he’s a long-term prospect, he won’t be one to break in at the level this year, I wouldn’t have thought,” Wheeler continued.