The pandemic expert who shut down the NRL insists it is far too early to predict when the competition can resume — despite ARL Commission chairman Peter V'landys boldly declaring "none of what she said came true".

V'landys is hellbent on the game resuming in front of no crowds on July 1 to minimise the devastating financial impact of the COVID-19 crisis on the code. 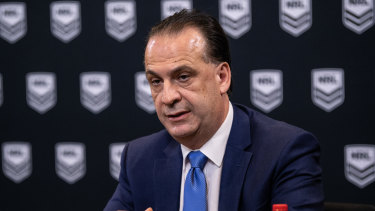 ARLC chairman Peter V’landys wants an early return for the NRL after claiming his own pandemic expert had got it wrong.Credit:AAP

The professor advised the NRL on March 23 that it should stop playing after a dramatic spike in positive coronavirus tests, making a startling prediction that a player could die if the competition continued.

"It's the calm before the storm — but that storm is coming," she told the Herald in an interview two days later. "What if one of your players gets sick and dies? Is it worth taking the risk of losing a player in the prime of their career?"

Her advice swung from playing in front of no crowds to a complete shutdown when the federal and state governments refused to close down schools.

She was also prompted by a series of events over that weekend, including the docking of the infamous Ruby Princess cruise ship at Circular Quay as well as tens of thousands of people flocking to eastern suburbs beaches and failing to obey social distancing.

Understandably, V'landys wants the competition to resume as soon as possible, fearing the catastrophic consequences for the game's future.

The reason for his optimism has been the decline in news cases of the coronavirus in recent days.

On Sunday, Prime Minister Scott Morrison said self-isolation and social distancing had slowed the rate of increase in infection from 25 to 30 per cent a day to 13 to 15 per cent a day.

That appeared to change on Wednesday morning with the rate of infection in NSW jumping from 114 new cases in one day to 150 the next, an increase of 30 per cent.

"That perception that it's mild, it's not a problem, is not correct. Young people have died," she said. "Children have died in this epidemic. It's not always a mild disease. A lot of people who are younger who are filling up the ICUs in the United States, even in NSW, a large number of the cases are in the 30s age group.

"If it's spreading in young people, the players are getting together every week for the games, congregating in groups creates a risk of transmission because one of them has asymptomatic infection, they could spread it and then the families and other loved ones, staff, doctors, physios and other teammates could get it."