Hawthorn president Jeff Kennett raised a series of misgivings regarding the governance of the AFL as league chief executive Gillon McLachlan was formulating a revolutionary rescue model for the 18 clubs.

Kennett, a member of the inner sanctum established by the AFL Commission in response to the COVID-19 pandemic, questioned the method around the AFL's bid to take financial control of the clubs and raised a number of red flags directed at head office and its stronghold over the clubs. 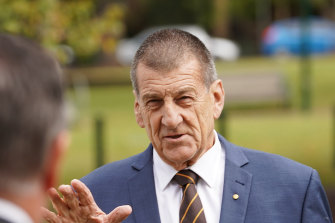 Describing the clubs at various stages as shareholders, stakeholders and custodians of the game, Kennett wrote that the AFL should provide the same financial transparency it was demanding of the clubs.

Kennett's letter followed two weeks of dramatic negotiations between McLachlan and the clubs as the competition shed up to 80 per cent of its staff and achieved pay cuts with the players as the AFL worked to borrow money to save the game.

The perilous financial plight of at least one-third of the clubs was exposed as the game faced the prospect of no further broadcast revenue or gate takings and a potential exodus of government, commercial, corporate and membership funds.

It has been revealed that McLachlan initially proposed establishing a central treasury to achieve an improved deal with the banks. This would have required every club to turn in its entire cash reserves to the AFL, a move baulked at by a number of club directors.

The combined cash reserves would have amounted to an estimated $100 million. Richmond's bank balance sits at a reported $25 million with the game's wealthiest club West Coast exceeding that amount – but ultimately the AFL borrowed against its biggest asset Marvel Stadium, conservatively estimated at being worth between $750 million and $1 billion.

It is not known how many presidents responded to the rebellious Hawthorn boss but several contacted in recent days felt full financial disclosure by head office was an unreasonable demand. Some presidents pointed to the privacy demands of financial institutions and the risk of circulating confidential club information – some of which remained on the brink of insolvency.

The Kennett call ultimately did not win support but McLachlan has pledged to provide clubs with regular updates on cost-cutting at head office.

The final draft of the new financial agreement between the AFL and the clubs, as revealed by The Age last week, was delivered by McLachlan on April 2 and included a covering note in which the league chief promised to keep the competition fully informed regarding the cost-cutting as he in turn was demanding of the clubs.

McLachlan also pledged on behalf of the AFL not to disclose the financial circumstances of various clubs as they fought for survival by borrowing funds from head office while drastically cutting staff and programs.

A number of clubs including the Western Bulldogs, Sydney, Geelong, Adelaide and Essendon will continue to draw upon their own funds and lines of credit to remain afloat in the coming months. But the prevailing view remains that only four – West Coast, Hawthorn, Collingwood and Richmond – could survive without AFL assistance until the end of the AFL financial year should the 2020 season not resume.

The Swans' proposed Moore Park redevelopment, which was to create a new elite training and administrative facility for the club as well as housing its NEAFL team and academies, has been placed in serious doubt due to the crisis.

Kennett's misgivings regarding the AFL and its new financial relationship and unprecedented control over the clubs have raised questions – put aside as the game fights for survival – about the wider governance of the game and the new balance of power.

Under the league's constitution the clubs retain the power to remove or introduce clubs from the competition. Requiring a two-thirds majority the clubs can also vote to remove the AFL Commission or individual commissioners, which happened most recently in 2000 when Melbourne president Joseph Gutnick and Carlton's John Elliott led a campaign that ultimately ousted Terry O'Connor from the game's governing board.

In 2018 Kennett and fellow Victorian club presidents Eddie McGuire and Peter Gordon – all of whom sit on the so-called AFL corona cabinet – organised a meeting of Victorian presidents disenchanted at their lack of voice in the AFL landscape.

The function, held at a Richmond property owned by Kennett, addressed a perceived communication breakdown between the AFL and club presidents. The presidents addressed their misgivings in a communique to AFL chairman Richard Goyder.