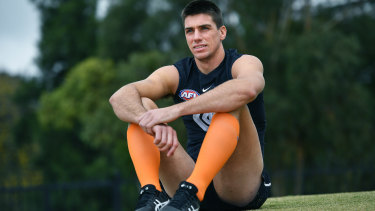 Kreuzer was the No.1 draft pick in 2007. Credit:Joe Armao

The 2007 No.1 draft pick fractured his foot in round one, his only game this season.

He played 56 consecutive games from his debut but ruptured his ACL mid-way through 2010.

That was the start of an injury interrupted career, although he only missed one game in his most consistent season, 2017.

He played in two finals, both elimination finals (2009 and 2013), winning one and losing one. He missed the 2013 semi-final loss through injury.

An elevated heart rate forced him to end his season early in 2018. He first suffered the issue in round 17 of that season.