Latrell Mitchell has been fined $1600 for lashing out at Wests Tigers’ Luke Garner with his boot, another $1600 for dropping knees and will also face a minimum three weeks on the sidelines for a high shot on David Nofoaluma.

After a dramatic 18-14 win by the Rabbitohs over the Tigers on Saturday night, Mitchell was handed three charges on Sunday by the NRL match review committee.

Mitchell faced scrutiny for appearing to boot Garner while getting up from a tackle in the 63rd minute of the game. Garner was holding onto Mitchell’s legs and the Souths fullback lashed out to free himself, and it appears the match review committee didn’t find the incident malicious given they settled on a $1600 fine for contrary conduct. 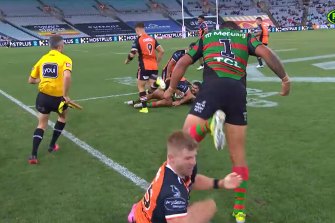 Mitchell was handed three charges on Sunday by the NRL match review committee following the Rabbitohs’ 18-14 win against the Tigers on Saturday night.

After the game, Michael Maguire said to the boot to Garner should have been dealt with straight away, rather than after the game.

“We end up down the other end and we get a penalty against us.

“Those sort of things are massive momentum changers and that hurts tonight in that result.

“Who knows where the game could have gone if that changes.”

Mitchell could be seen running off the field straight after full-time with Bennett revealing post-match the fullback had been dealing with a family issue.

It was later revealed Mitchell’s father Matthew had to be taken to hospital after feeling unwell at the game, but has since returned home.

Bennett also hailed Tom Burgess after the forward claiming the game for the Rabbitohs with a thrilling ending to the game.

Adam Reynolds nailed a two-point field goal to help send the match into extra time before Burgess found himself in open space to sail over the try line.